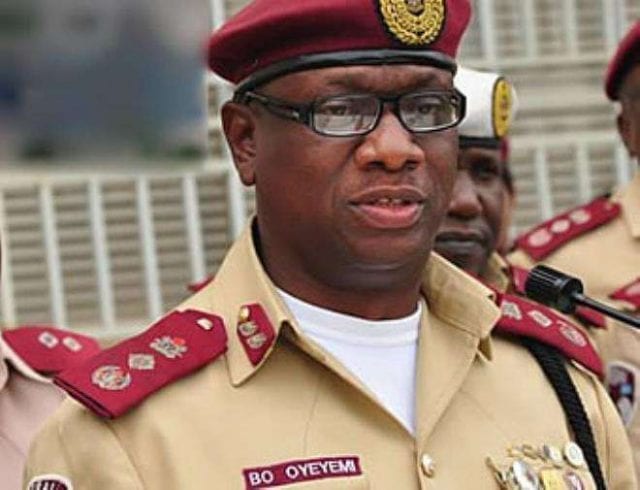 The Federal Road Safety Commission (FRSC) has come out to say that it would arrest masquerades that cause traffic congestion or accidents during the Christmas and New Year festivities.

According to him, drivers must make sure they do not disobey traffic rules and embark on night journeys during the festive period.

He then hailed the government of Anambra for its support for FRSC and insisted that he is committed to making sure the motoring environment is safe in the state.

Federal Road Safety Corps is the Government Agency with statutory responsibilities for road safety administration in Nigeria. Founded in 1988, the Federal Road Safety Corps (FRSC) operates in all Nigerian states as well as the Federal Capital Territory and is the lead agency in Nigeria on road safety administration and management. The statutory functions include: Making the highways safe for motorists and other road users as well as checking road worthiness of vehicles, recommending works and infrastructures to eliminate or minimize accidents on the highways and educating motorists and members of the public on the importance of road discipline on the highways.

The FRSC is currently headed by Boboye O Oyeyemi, MFR, mni, whose title of Corps Marshal is the highest rank in the Corps ranking system.

Prior to the establishment of Federal Road Safety Commission in 1988, there was no concrete and sustained policy action to address the carnage on Nigerian roads. Earlier attempts in this direction were limited to discrete and isolated attempts by some states of the federation and individuals.

Notable among the efforts to institute a formidable road safety program was the effort of Shell Petroleum Development Company of Nigeria (SPDC) between 1960 and 1965. The effort of the Nigerian Army in the training of its officers and men on road safety in the early 1970s also contributed to road safety ideas and consciousness in Nigeria: The Nigerian Army started the First Public Road Safety Campaign in 1972 when it initiated an annual Road Safety Week.

The unpleasant trend in the nation’s road traffic system which resulted in upsurge in road traffic accidents made the Federal Government initiate a search for a credible and effective response to the challenge.

D’banj and Obasanjo In Ethiopia For AU Summit 2014