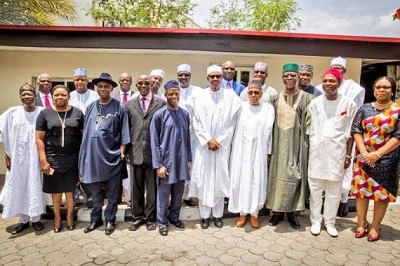 In the aftermath of the outgoing Peoples Democratic Party-led Federal Government’ call to the President-elect, Muhammadu Buhari, to mind against utterances and actions that seem to indicate he is running a parallel government, the All Progressives Congress, APC, has published the contentious terms of reference, which elicited the warning.

On Wednesday, after the Federal Executive Council meeting presided over by President Goodluck Jonathan, the Minister of National Planning, Dr. Abubakar Sulaiman, had conveyed Government’s exception to the terms of reference the president-elect gave to his transition committee.

“We take exception to some utterances and some of the terms of reference that look as if the current government is being stampeded or intimidated”, the minister told State House Correspondents.

On the heels of a statement by its National Publicity Secretary, Alhaji Lai Mohammed, which accused the Jonathan administration of plotting to hinder a smooth transition on May 29, the incoming governing party has published the terms of reference for Mr. Buhari’s transition committee on its website, for the records.

a. To develop a clear framework for liaison with the out-going Administration for purposes of a smooth hand-over/take-over.

b. To receive hand-over documents from Ministries, Departments and Agencies and itemise the most important or most urgent issues confronting the in-coming government.

c. To review and make preliminary assessment of the balance sheet of government with particular emphasis on

(1). The status of assets and liabilities of government.

(2). Cash flow position of the government.

(3). Quantum of public domestic and external debt of government and their deployment.

(4). Government’s out-standing contractual obligations and its ability to meet such obligations.

(5). Status of implementation of capital projects.

c. Under-take a preliminary assessment of the security challenges facing the country and the

(2). Counter policy measures being implemented in the Niger Delta to deal with unrest and major economic crimes in the area. In particular, the status of the Amnesty Programme.

(3). Readiness of the Police and other national security and intelligence agencies in addressing threats to law and order

e. Suggest “quick fixes” which will result in tangible, visible and practical measures so that CHANGE will be seen after 30 days, after 100 days, after 6 months of the Administration taking office.

f. Make any other observations which in view of the Committee would be helpful to the transition and take-off of the new Administration.

g. Report back to the President-elect in two weeks.

I Want To Win Trophies At LAFC – Gareth Bale