The fortunes of the All Progressives Congress, APC in Benue State have further depleted with the exit of a three term member of the House of Representatives, Rt Hon John Dyegh and his teeming supporters.

A former director of administration at the Federal Medical Centre, Makurdi, Dr Joseph Igbawua also dumped the APC for the PDP.

National Chairman of the PDP, Dr Iyorchia Ayu, who presented party flags to the lead decampees disclosed that one of his core agenda in the PDP is to reconcile all the state chapters of the party and prepare for victory at the polls in 2023.

He urged the people of the local government to shun divisive tendencies and support the party to ensure that the party is returned victorious in all future elections in the state and the federal level.

He assured the mammoth crowd that trooped out for the ceremony that massive homecoming to the PDP will be witnessed under his leadership as National Chairman.

He hinted that one day, Governor Ortom will bring Senator Akume to him to be baptized by the PDP Bishop.

Dr Ayu warned rumour mongers and crisis entrepreneurs to stay clear of the leadership in Benue, pointing out that he will never fight with Governor Ortom but remain a pillar of support for him and his administration.

The National Chairman said the only honour Benue people will give him is to ensure victory for the PDP in the 2023 elections across all the wards in the state.

Hon Dyegh, representing Gboko-Tarka at the House of Representatives said his exit from the APC was primarily because of the election of Dr Iyorchia Ayu as National Chairman of the People’s Democratic Party, PDP.

Besides, he said he believes Governor Ortom deserves support from every Benue person because of the purposeful leadership he has brought to bear on the affairs of the state coupled with the transformation of Gboko by the Ortom administration.

Receiving the decampees, Governor Samuel Ortom pledged sustained unity among leaders in the state, stressing that a lot of benefits will be derived from unity of purpose.

Governor Ortom who corroborated Senator Ayu’s prediction that Senator George Akume will soon return to the PDP, said Akume does not belong to where he is currently and will surely return and be baptized by the PDP.

During the decamping ceremony, Hon Dyegh presented two 406 Peugeot Cars to Gboko and Tarka Local Government PDP Chairmen as his contribution to the growth of the party.

Senators Gabriel Suswam, Orker Jev, Abba Moro as well as members of the House of Representatives and Benue State House of Assembly Speaker among others gave goodwill messages at the ceremony. 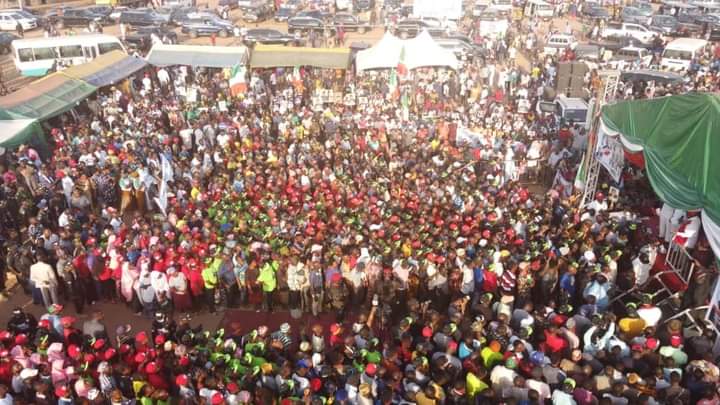 APC: Timing Of Planned Subsidy Removal Will Cause Hardship

APC Convention: I’ve Not Stepped Down From Chairmanship Race – Monidafe

Ekiti APC Primary: My Life Under Threat – Adedipe Cries Out

My Ectopic Pregnancy Drained Me Emotionally And Mentally – Kris Asimonye

Critics Must Stop Focusing On My Bad Performances – Jordi Alba

Rihanna Parties With Label Boss Jay Z Without A Bra On!

Bale Is Not A Trouble Maker – Zidane