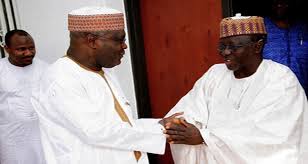 Governor Tanko Al – Makura of Nasarawa State has said that the All Progressives Congress, APC, is incomplete without the input of former Vice President Atiku Abubakar, who is one of the party’s leading presidential aspirants.

The governor spoke when Mr. Atiku paid a courtesy visit to the Government House, Lafia.

He said Atiku coming into the APC added value and gave a sign of direction to the party.

Almakura especially described the former vice president as “quality material” and an achiever, who would soon be at the helm of affairs.

“No caucus, executive meeting of the party ends perfectly without the Turaki. APC has arrived and eventually has eminent qualified persons that will lead us”, he said.

He urged all presidential aspirants of the party to come together and pick a consensus candidate among them to avoid friction.

In his response, Atiku said that Mr. Al-Makura has positively developed Nasarawa State and deserved a second tenure to consolidate on his achievements.

He said that all the APC states across the country have performed better than their PDP counterparts and urged the people of the state to give the governor another mandate to continue his good works.

“APC states have done better than PDP because they have monumental achievement for all sectors that have direct bearing on the lives of the people”, Atiku said.

Rain Of Tributes At FEC As Jonathan, Ministers Remember Life And...

Proven Approach for Relief from Stress of War and Violence [RECOMMENDATION]