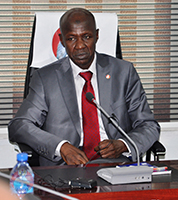 The former Minister of the Federal Capital Territory (FCT), Bala Mohammed has sued the Economic and Financial Crimes Commission for N100m.

According to Punch, Mohammed is claiming damages for his continued detention by the anti-graft agency.
A 15 page affidavit deposed at the High Court in Abuja, the former minister’s counsel, Umar Usman said the EFCC invited Mohammed for a chat on October 24, 2016 and arrested him till date.

The affidavit also claims that Mohammed “…has suffered substantial deterioration of his health and untold psychological trauma and mental torture.”

The former minister wants the court to declare that his arrest and detention by the EFCC is illegal, unlawful, unreasonable, unjustified and unconstitutional.

Also, Mohammed is seeking a declaration of court, stating that he should be released on bail by the EFCC pending any arraignment before a court of law.

The former minister also wants the court to issue an order enforcing and restoring his fundamental right to personal liberty as contained in section 35 of the 1999 constitution, which he said has been violated by the EFCC.

Reports say Mohammed has allegedly been implicated severally, in a series of fraudulent transactions relating to one of his sons, as well as former First Lady, Patience Jonathan.

PDP Is To Blame For Fuel Scarcity – Tinubu