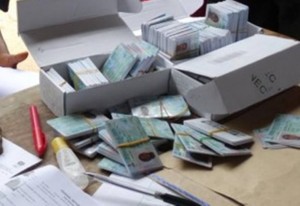 The group backed its claim with a statistical analysis of the distribution of PVCs, which showed the number of registered voters yet to collect their PVCs in various zones.

The group noted that it has observed “a criminal gross disparity of voter spread designed to tilt the election to a pre-determined outcome”, in the distribution of PVCs.

The group insists that all the 68.8 million registered voters must be given unfettered access to freely collect their PVCs and cast their votes as provided for in the constitution. It added that it might be forced to take INEC to court if that condition was not met.

“Let us call a spade, a spade. There are two main contenders for the Presidency in this election. The analyzed data above depicts a worrying trend. Voters in the zones that tend to support President Goodluck Jonathan are massively disenfranchised by the application of the so-called PVCs debacle, 40% to 50% of voters in the these regions who are lawfully and duly registered to vote will be denied their right to vote by INEC.

“That is nearly half of the support base of the President, simply nullified by administrative (failure) prior to the election. By comparison, the zones that tend to support Buhari are handed a massive voter advantage, nearly 80% of his support base will be allowed to cast their votes by INEC.

“In an election, which many say will be won or lost by a slim margin, to now disenfranchise 26 million voters through a questionable and unlawful rule by INEC is not acceptable by any measure.

“CAA condemns in its entirety. This attempt by INEC to undermine our nescient democracy through this criminal enterprise to determine the outcome of this electioneer before the ballot is cast,” a statement by the group said.

The group also said that with the way things are, it would be impossible for INEC to finish the distribution of PVCs. “INEC cannot meet up with the issuance of voters card to all registered voters, even the PVCs is not being realistic because of the past failures. For example, INEC is talking about distributing permanent voters cards. Let us assume that sufficient PVCs have been produced the commission, how is the PVC is still being distributed.

“We have credible information that in some places in the rural areas, INEC staff take the PVCs for distribution and because of the disappointments of the past, [people] refuse to come out for collection of PVC. The commission staff then leave the PVCs to community leaders to distribute. I believe that should not be the responsibility of the village heads to do that but INEC.

“Again, how can we realistically expect INEC to make PVCs available to every registered voter within two weeks, something they failed to do in many years,” Balarabe Musa said.

Ambode To Clampdown On Hotels Without Sign-Posts

LinkedIn to Deliver Visionary Address at CommunicAsia2015 and BroadcastAsia2015