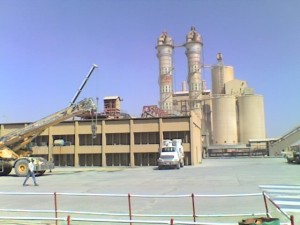 Suspected Boko Haram gunmen on Thursday stormed Ashaka Cement factory in Gombe. The attack on the Lafarge-owned cement plant is the second in two months. They were however repelled by the military.

The insurgents had stormed Ashaka town, where the cement company is located, as well as Bajoga town. They also raided banks and burnt government buildings and offices of political parties.

The gunmen dressed in military uniform had at about 7am first stormed Bajoga, about 60 kilometres from Gombe city, the Gombe State capital, in a convoy of 20 vehicles. They were however pursued by the military from Bajoga to Ashaka, after three hours of fighting.

In Bajoga, residents told newsmen that the militants shouted “Allahu Akbar” (God is Great) before firing sporadically and burning down a police station during the battle with the troops.

“They raided two banks and set fire to offices of political parties. They also set sections of the local government secretariat on fire,” a resident of the town, Babani Ashiru told Vanguard.

A school teacher, Sa’adu Balarabe said troop reinforcements were sent from Gombe and a military jet which bombed the militants and forced them to withdraw.

In Ashaka, residents reported heavy fighting between troops and the gunmen in the town from about 11 am.

According to one of the residents, Samaila Adnan, “The gunmen kept shouting ‘Allahu Akbar’ (God is Great) and firing guns haphazardly. They went into the cement factory and took away some vehicles. They didn’t touch anyone.” Adnan added that after initial skirmishes in the town, the soldiers withdrew.

A staff of Ashaka cement who chose to remain anonymous said that the factory was evacuated before the attack.

“Our fear was confirmed. They went into the factory and headed to the administrative building where company vehicles were parked. They took away several Hilux (four-wheel drive) vans. They also went to the factory clinic and took away an ambulance along with drugs. They didn’t harm anybody.”

The insurgents had on November 4 attacked the plant, when pick-up trucks and large quantities of industrial dynamite used in mining were also taken. The Ashaka staff however said that the explosives had been moved since the last raid.

I’m Won’t Second Guess Why Pep Guardiola Did Not Want Me...

Is Alexis Sanchez Passionate Or Unhappy?