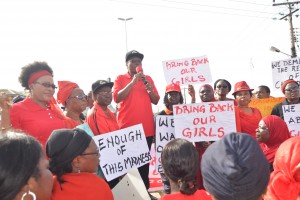 Wife of the Governor of Ekiti State, Erelu Bisi Fayemi, addressing protesters during a ‘Bring back the Chibok girls’ protest march, in Ado-Ekiti.

The Deputy Governor of Ekiti State, Prof. Modupe Adelabu, and Wife of the Governor, Erelu Bisi Fayemi, on Friday, lamented the spate of insecurity and widespread bloodshed causing weeping and mourning daily across the country.

They bared their mind during a solemn procession of Ekiti women, led by the First Lady, to protest the abduction of the 234 female students of the Government Girls Secondary School, Chibok, Bornu State, on April 15.

Before the protesters hit the streets, the governor’s wife presented a protest letter addressed to President Goodluck Jonathan to Adelabu, who received the team on behalf of the Governor, Dr. Kayode Fayemi.

In the letter, the women called on the President to act decisively and end the regime of ‘promises, diplomacy and pledges’ over the rescue of the girls from the Boko Haram enclave.

In a voice laden with emotion, the deputy governor lamented that mourning and weeping have become a daily routine across the country following unabated sectarian violence, kidnapping, armed robbery and other crimes.

She expressed sorrow about the spate of insecurity in the country, which she said was in sharp contrast to what obtained in the yesteryear.

The deputy governor later led a short prayer session for the timely rescue of the girls and for peace to reign in every part of the country.

“If it is not Boko Haram killing people, it will be armed robbers. They kidnap and kill people for rituals as if we are animals. When we were growing up, we moved freely in every part of the country without fear.

“But, I must say that this is going to be the last time Nigeria mothers and women will weep and mourn. The end of the boastful leader of Boko Haram is near. He will end up like Goliath.”

Addressing the protesters, the governor’s wife said that Ekiti women decided to lend their voices to the incident in solidarity with others across the country and the world at large.

She urged President Goodluck Jonathan to be more decisive in the search for and rescue of the schoolgirls, who are now spending their fourth week with their abductors.

Fayemi said, “We are here to lend our voices in solidarity with others across Nigeria and across the world who are deeply distressed about the recent kidnapping of over 200 of our children from Chibok.

“Nigerian mothers are tired of weeping, mourning and shedding tears over their children. Our children are supposed to survive us; we are not supposed to bury them.”

She condemned the incessant act of terrorism and criminal activities that have enveloped the country, which she said had made everywhere unsafe for the young and adults.

The First Lady used the opportunity to thank and commend members of the international community for lending support to the nation during its trying periods.

Mazda: we have a reasonable chance of qualifying

Nigeria Is At A Major Cross-roads In Its Developmental History –...

Ayo Fayose Can’t Teach Us How To Run PDP – Wale...

Towards A Comprehensive National Security Strategy By Dr Kayode Fayemi