Congress, Don't Let Us Down: Oppose the Bill to “Fast Track” TPP

EFF and other public interest groups have sent a letter to lawmakers reiterating our opposition to a “fast track” bill that would restrict Congress ability to have meaningful input into or review trade agreements like the Trans-Pacific Partnership (TPP) agreement, the Transatlantic Trade and Investment Partnership (TTIP), and others. In particular, we denounce certain “trade objectives” in the bill that encourage a copyright maximalist agenda without upholding fair use rights. Beyond the procedural problems with fast track, the inclusion of such language contradicts an important doctrine in US law that has been crucial to give artists, innovators, students, and the public, the freedom to use, learn from, and build upon existing culture and technology.1

In the State of the Union address tonight, President Obama is likely to call for bipartisan support for his trade agenda, and call for the passage of this fast track bill. US lawmakers should stay skeptical of any claims that “fast track” would increase Congressional participation in trade agreements. Our representatives must exercise their constitutional authority over agreements like TPP to ensure that users’ rights are upheld, not ignored. 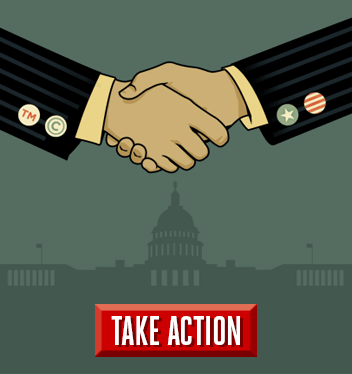 If passed, the “Bipartisan Congressional Trade Priorities Act” would give over to the executive branch much of the exclusive constitutional authority over trade policy that Congress is supposed to exercise. Sponsors of the bill claim that this process “provides greater transparency and gives Congress greater oversight of the Administration’s trade negotiations.” But in fact, fast track does precisely the opposite, ensuring that there’s even less transparency and less democratic oversight over trade negotiations, while making it easier for Big Content to impose its wish list of draconian copyright provisions on the US and its trading partners through secretive trade pacts.

See also  In Harm's Way: The Dangers of a World Without Net Neutrality

Over 550 labor, environmental, and community groups have signed a letter in opposition to the fast track bill. This follows several other letters from both over 170 Republicans and Democrats in the House of Representatives who have written in opposition to this re-delegation of federal powers.

We have joined with a platform, StopFastTrack.com, that allows anyone in the US to get in touch with their representatives to stand firm against fast track. TPP is a sprawling agreement, with dozens of chapters covering a broad spectrum of policy areas, and the large and diverse set of groups opposing it speaks to that fact. While we may not all be concerned about the same issues, we can agree on at least one thing: trade agreements must be fair and transparent, especially if they might bind our lawmakers to new regulatory obligations.

The time is now to stop fast track and demand that the U.S. Congress hold our trade negotiators accountable. We need to maintain the pressure and ask that our representatives oppose this draconian process. Demand that your Congressional representatives step up to the plate and take back their Constitutional role in trade policy and shine a light on this opaque, secretive process.

Address by MP Nina Grewal: Announcement of Funding to UNICEF for Humanitarian Assistance in Somalia

This Season Has Been Really Hard For Me – Lewandowski