Jurgen Klopp has revealed Liverpool are regularly monitoring the transfer market as injuries continue to mount up, and believes the team will be able to survive any absence of Philippe Coutinho.

Coutinho was stretchered off during the 2-0 win over Sunderland on Saturday, with a source telling ESPN FC at the weekend that the “likelihood” of the Brazilian’s injury was ankle ligament damage.

Sources told ESPN FC earlier this month that Liverpool were among a host of the clubs that were monitoring FC Rostov’s Sardar Azmoun after Klopp had previously admitted he may be forced to dip into the January transfer market.

Klopp said the club are always looking at potential targets, but that does not definitely mean they will be making additions.

“We have a few hours of training a day, but I’m here for much longer than for training,” Klopp told a news conference on Monday. “In all this time, we do different things and a few of these things is to watch the market, watch what’s happening around, scouting, to look at promising players from leagues you cannot watch too often.

“That’s what we do all the time. That doesn’t mean we can take one, but it’s only to be informed — to know about development, strength, whatever and that’s what we do. That’s preparation for a situation that could be in the next transfer window. Actually, I’ve thought before [Coutinho got injured] about it, but it doesn’t mean we’ll do it.

“We have to think about it all the time, to prepare the situation. We’ve already prepared for the summer and that’s how it is. We’ve spoken about the camp, organised the camp for the summer and all this stuff, whether transfers will be done or not, if we have another few injuries or not… We will see.

“Maybe a few young lads now will take the chance because of injuries to other players so then we don’t think about it [making a signing] anymore. It’s not to make a transfer, it’s only if we think the squad needs another player then I think we will do it, otherwise not.”

Meanwhile, Klopp was adamant that Liverpool will not dwell and feel sorry for themselves as injuries continue to pile up within the squad.

The Reds are currently without three vital members of the side with Coutinho, Daniel Sturridge and Adam Lallana all currently out on the sidelines.

However, Klopp maintained that his team can cope with the loss of Coutinho and others, reiterating that football is a team game.

“Phil Coutinho is a really good football player,” Klopp added. “If we cannot use him for the next few days or weeks, each team in the world would feel it, that’s how it is. That’s no excuse for anything.

“Philippe, as good as he is, can’t decide games by himself, even if it looks sometimes like this because he takes the ball, little dribbling, good shot and it’s a goal, but then everyone has to defend.

“It’s not the best thing that I can imagine, it’s not that I dreamt about it and thought it’s a good idea for us to show we can play without Phil, but it’s clear that if he’s not in, then we have to show this and we will show this.

“How you see now: Phil, not in; Adam, close but not in; Daniel, maybe close, but not in… These are all quality players so of course we miss them, but we don’t look for excuses, we only want to perform and play football. And I think the way we play, it’s possible without them, but it would be better if they were all fit.” 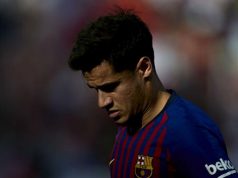 Coutinho Is Not Thinking About Leaving Barcelona – Agent

I Have 60 Reasons Not To Vote For Jonathan, Failure To...

Tonto Dikeh Take A Stroll With Her Mother-In-Law