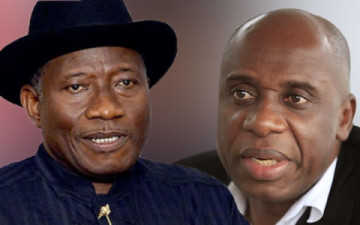 “The fuel subsidy was N300 billion under former President Olusegun Obasanjo and it remained the same under late President Yar’Adua. Within six months under President Jonathan, the fuel subsidy rose from N300 billion to N1.9 trillion. Yet, Jonathan wanted more money for fuel subsidy,” he said at a reception organised for him by a Committee of Friends at the International Conference Centre, Abuja.

“Is it that the country now doubled its population or bought more machines or started manufacturing? As chairman of Governors Forum, I was in a position to get my share of the N1.9 trillion but I chose the part of honesty and truth, you cannot catch me being dishonest.

“There was a time I walked into a meeting with the president (Goodluck Jonathan) and at the meeting, the argument was that they wanted more money for oil subsidy. As the chairman of Governors Forum, I stood my ground and told the president I was not going to support that.

“He asked me why and I explained that we were already in court on the issue of fuel subsidy. The president abused the hell out of my life. I have huge respect for the president, but the only thing that made me disagree with him was on the issue of the management of the country’s treasury,” he said.
Commentating on allegations that he was anti South-South, Amaechi said: “I told the president then that those who were accusing me of being anti South South will come out and tell the world the development that has happened to the South South under his presidency. The president confirmed it himself during the campaign that he has done nothing, he said: “I know I’ve done nothing but if you vote for me, I’ll do…” so I call him I’ll do president.

“This prompted the trouble between me and the Jonathan administration.”

“Some people will say I betrayed the South South, I have no word for betrayal. May God not give me the ambition the current governor of Rivers State has, he can sell anybody. God should rather put me to death than to have an ambition to sell this country.

“I’m not angry with the people who have come out to blackmail me. My anger is with Rivers people who know that I don’t like money and I expect them to get up and defend me, that this is not in Ameachi’s character, that’s my anger. The Rivers people should stand up and tell this man to stop painting Amaechi black.

“I heard they, PDP, want to address a press conference to tell the president not to give me appointment ,that I’m corrupt but they don’t know that appointment is not everything. If God is happy with me, I’m happy with my life,” he said.