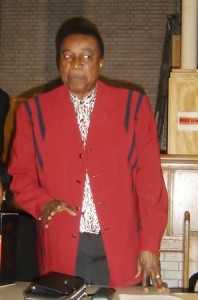 He died at the Niger Foundation Hospital, Enugu on Friday. He had recently just returned from the United States, where he had received treatment for cancer.

Nwobodo Jr. was said to have complained of having pains on his leg and met a senior oncologist with the University of Nigeria Teaching Hospital (UNTH), Enugu. He however died of complications from medication.

According to his father, Senator Nwobodo, who was visited by Governor Martin Elechi of Ebonyi State, Nwodobo Jr. was taken to the best cancer treatment hospital in the US where he stayed for five months and was discharged before he returned to Nigeria recently.

He added that the family had even gone to church for a thanksgiving service in his home town, Amaechi Awkwunanu, two weeks ago to thank God for his health, only for him to start feeling the excruciating pain on his leg which led to his death on Friday.

Elechi condoled with the Nwobodo family and prayed God to grant the family the fortitude to bear the irreparable loss.

Nwobodo Jr. was until his death, a member of the board of the University of Benin Teaching Hospital. He was also a Commissioner for Science and Technology in the past administration in the state.

Courtois Is One Of The Best Goalkeepers In The World –...

I Did Not Take Headies Award For Granted – Simi