Bayelsa State Governor, Hon. Seriake Dickson on Wednesday flagged off his administration’s Mid Term anniversary with the commissioning of the Yenagoa gateway security posts aimed at complementing the integrated security command and control system of the State Government.

Also, to build the capacity of teachers in the state, the Governor announced that the Teachers Training Institute at Bulou Orua would be affiliated to the department of continuing education of the state-owned Isaac Jasper Adaka Boro College of Education, Sagbama.

Commenting on the gateway infrastructure which comprises a water fountain and other structures, Governor Dickson explained that the facility would not always be accessible to members of the public as they would be essentially used for security purposes.

The Governor noted that the project would add to the aesthetics of the capital city and the state in general, stating that more of such infrastructure would be provided as part of government’s urban renewal drive.

In his words: “the water fountain and the associated structures here are essentially security buildings; they are not buildings that members of the public will have access to at least not on a regular basis. They are to complement our Integrated Command and Control System.

“And this being an entry and exit point, these buildings are going to be very useful. The fountain itself is very wonderful and it is going to add to the aesthetics of our state capital and the state generally. And, I know we are going to have such fountains.

In an interview with newsmen, Governor Dickson expressed satisfaction with the level of work done and commended the people, particularly the youths for their peaceful disposition, noting that peace was an essential ingredient in the development and growth of the state.

According to him, majority of the already completed projects will be commissioned by President Goodluck Jonathan during his planned working visit to the State at a date to be announced soon.

Earlier, Governor Dickson had commissioned some people-oriented projects in Sagbama and Kolokuma Opokuma local government areas of the state as part of activities marking his administration’s 2 years anniversary.

Accompanied by his Deputy, Retired Rear Admiral Gboribiogha John Jonah, Secretary to the State Government, Prof. Edmond Alison-Oguru, other members of the state Executive Council, the Governor inaugurated a rural electrification project and a 2.5km internal road at Toru Orua.

Fielding questions from journalists, the Paramount Ruler of Bolou Orua community, Chief Felagha Tounarigha expressed satisfaction with the massive transformation of infrastructure taking place in the community and the State generally.

While calling on the people to jealously guard the various projects already put in place, he also commended Governor Dickson for his visionary leadership and prayed God to continue protect and direct him. 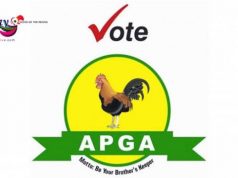 I Wish Everyone Their Heart Desires In The New Year –...

Why I’m Still Ag. INEC Chair Despite Expiration Of My Tenure...

EKSG Charges Heads Of Tertiary Institutions To Be Security Alert