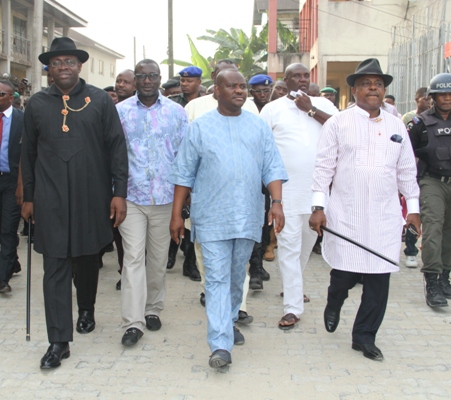 As part of his efforts at promoting Ijaw national integration, Bayelsa State Governor, Hon Seriake Dickson paid a visit to Abonnema, the headquarters of Akuku-Toru Local Government Area where he fraternized with the chiefs and people of the area.

Governor Dickson, who had paid a similar visit to the people of Buguma sometime this year, renewed his call on Ijaws to build bridges of unity across the country and speak with one voice in pursuance of their collective interests.

Speaking during a courtesy call on the Amayanabo of Abonnema, King Disrael Gbobo Bob-Manuel, Hon. Dickson expressed gratitude to the people for their show of understanding and maturity in handling the Soku-Oluasiri dispute.

His words: “The first thing I will like to say is to appreciate you, your chiefs and indeed all the wonderful people of your kingdom for their show of maturity in handling some of the issues that have come between us as brothers. You are all aware of the long-standing unfortunate disagreement between our major Ijaw brothers here and those in the Nembe clan, which dispute as you know predates even the creation of Bayelsa State. It is an unfortunate chapter in our history as Ijaw people.

But the important thing is when disputes, which are inevitable in the course of human interactions take place, it is important that we have the right frame of mind and show understanding and maturity to move for an amicable settlement.”

He said in line with his administration’s policy in ensuring peaceful co-existence among the Ijaws, the Bayelsa State Government under his watch would do everything within its reach to achieve amicable resolution of the dispute and emphasized the need for leaders in the region to close ranks and utilize the resources of Ijaw land to develop the region rather than cause disaffection among its kith and kin.

While commending the people for complementing Government’s efforts through self-help projects in developing their area and upholding the rich Ijaw cultural heritage, Governor Dickson also saluted them for supporting the transformation agenda of President Goodluck Jonathan.

Responding, the Amayanabo of Abonnema, King Disrael Gbobo Bob-Manuel, expressed gratitude to the Governor for the visit, noting that it would go a long way in strengthening the bonds of unity between the people of Rivers and Bayelsa States.

Commenting on the dispute, he expressed satisfaction with the way the issue was handled by the President and urged other stakeholders to address the matter dispassionately.

He used the opportunity to call on the Federal Government to prevail on the Niger Delta Development Commission, (NDDC) to complete on going land reclamation projects which according to him has suffered serious setbacks over the years.

“We went to the Aso Rock Villa and we had a very fruitful meeting with him. I was not shocked but impressed by his humility, candour and openness and we believe that these issues will be resolved amicably.”

King Bob-Manuel also called for the resuscitation of a sea port that existed in the-colonial era to boost socio-economic activities and rehabilitation of the only girls secondary school in the area.

Italy Leave It Late Against Macedonia