Delta State Governor, Dr. Emmanuel Uduaghan has signed 451 Billion Naira 2014 Appropriation Bill into law with an assurance that more money would be spent on capital projects this year for the benefits of Deltans.

Dr. Uduaghan who stated this while signing the 2014 Appropriation Bill and three other bills  in Asaba  disclosed that 161.74 billion Naira or 36% of the total budget was for recurrent expenditure while 289.2 billion Naira or 64% was for capital expenditure.

The other bills signed into laws were The Delta State Local Government Bill 2013; Delta State Security Fund Bill, 2013; and The Renumerations, Salaries, Gratuities and Allowances of other Public Officers Bill, 2013.

The Governor said that the bills would assist the State Government in ensuring sound financial management, good governance and increased infrastructural development for the benefit of Deltans.

He explained  that capital expenditure was higher than recurrent in this year’s budget as the State Government in the last few years has tried to control recurrent expenditure so as to free up  more funds for capital  projects, stressing that Government is spending more on capital projects as this is what the people benefit from directly.

On the Security Trust Fund Bill, Dr. Uduaghan disclosed that the bill will enable Government synergise with the private sector and corporate individuals on the provision of logistics to meet security challenges in the State. 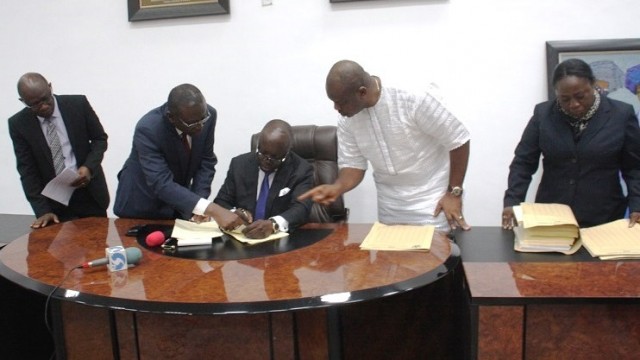 The Governor said that since security is vital to the success of the “Delta Beyond Oil” initiative, Government will partner with corporate individuals and bodies on assistance to provide security for all and free up the scarce resources spent on logistics for security for other capital projects.

Governor Uduaghan explained that the other two bills –Delta State Local Government Bill, 2013 and The Renumerations, Salaries, Pensions Gratuities and Allowances for Certain Public Office Holders Bill. 2013- would reduce the confusion associated with previous amendments and consolidate all amendments into one single law.

The Governor stated that local government administration was very important in the development of the State stressing that a strong local government structure would help reduce the burden on the State and Federal Government in the provision of infrastructure and services at the grassroots.

He commended the State House of Assembly for the efforts put into the passage of these bills and promised to continue to partner with them for the development of the State.

While presenting the four bills, the Speaker, Honourable Victor Ochei explained that the four bills were to enhance and improve on the dividends of democracy in the State

I Will Help Neymar To Win The Ballon d’Or – Mbappe