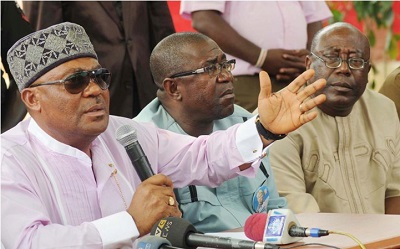 The All Progressives Congress (APC) in Rivers State has called on President Muhammadu Buhari to hold the state Governor, Chief Nyesom Wike responsible for any breach of peace in the state that may result from his planned dissolution of elected chairmen and councilors of the 23 local government areas of the state.

This is as the party called on the National Assembly, Civil Society Organizations and the general public to prevail on the governor to jettison the idea of sacking the local government officials, who it pointed out were duly elected on May 23, 2015.

The opposition party in a statement issued in Port Harcourt yesterday, and signed by its state chairman, Dr. Davies Ibiamu Ikanya, vowed that any undemocratic dissolution of the Councils will not only be resisted but may also be a call for a revolution that will consume the ‘illegal’ government currently operating in the state.

Ikanya said, “Rivers APC would like to call on the President of the Federal Republic of Nigeria and the Commander-in-Chief of the Nigerian Armed Forces, the heads of the various security agencies and the general public to hold the Nyesom Wike-led Rivers State Government responsible for any breach of peace in Rivers State that may result from the illegal moves to do away with the duly elected 22 Local Government Councils in the state in order to replace same with Wike’s hand-picked cronies as Caretaker Committees.

“We urge the Bukola Saraki-led National Assembly, civil society organisations and other allied bodies to prevail on the Wike-led administration to jettison the dangerous moves to dissolve the Councils that were elected on May 21, 2015 for a three-year tenure and sworn into office by former Governor Chibuike Amaechi on May 25 as this is nothing but an invitation for anarchy”.

The Rivers APC chairman stated that the governor lacked the powers to dissolve duly elected local government officials in the state, adding, “We are aware that Chief Nyesom Wike claims to have read Law though he never practised this noble profession for one single day and may therefore not know the position of the Constitution of the Federal Republic of Nigeria on this issue.

“Any such action by Wike will not only be an exercise in futility but would be in clear contempt of court as the issue is currently before the Port Harcourt Federal High Court in Suit No: CA/PH/131/2015 and the Court of Appeal Suit No: FHC/PH/CS/84/2015.

“Besides, the Supreme Court of the Federal Republic of Nigeria has severally ruled that Governors of States in Nigeria lack the powers to sack elected Local Government Councils as in the case of the removal of 148 elected Local Government Councils by the Abia State Government in 2006 and subsequent Court of Appeal judgments on Imo and Ekiti states in 2012 and 2013 respectively, where it was held that such actions by state governors amounted to ‘executive rascality’.

“For Wike to seek to dissolve the Local Government Councils that were duly elected by the people of Rivers State, which tenure has just begun is nothing but a devilish gamble sure to throw Rivers into a state of anarchy. This is an ill-advised move that will lead to the spilling of more Rivers blood, as if the one that was spilled to install him as governor is not enough”.

Lagos Govt graduates 100 Women and Youth Farmers; charges Them to...

You Cannot Be Sure In The Goalkeeper Position – Klopp

Omowunmi Was An Epitome Of Love And Pride To Womanhood –...