How We Scuttled Prisoners’ Attempt To Escape From Calabar Prison – Comptroller 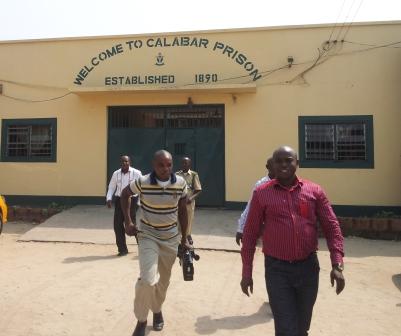 Udosen told newsmen in Calabar that the inmates overpowered some prison guards, seized their rifles, fired shots and injured some of the guards.

He said that the inmates also broke a section of the prison walls in their attempt to escape.

He said the inmates did not succeed in their attempt to escape as soldiers and state security service operatives, the Nigeria Police and Nigeria Security and Civil Defense personnel contained them.

He said: “By 11 o’clock this morning, I was in my office in the headquarters when the DC in charge of this prison called me that there was serious problem in the yard I rushed down.

“When I got to the prison, the whole place was filled with security agents with rifles who came to assist us.

“Inmates in two cells with about 70 inmates in each cell overpowered some prison staff and rushed to the armoury, seized rifles and open fire on our staff.

“They broke other cells and the whole yard was filled with inmates who carried what they could get to break the prison fence.

“Luckily they have all been rounded up and nobody has escaped. A lot of people were injured and one staff had been rushed to the hospital.

“Right now doctors with their team are treating those who sustained injuries”. (NAN)