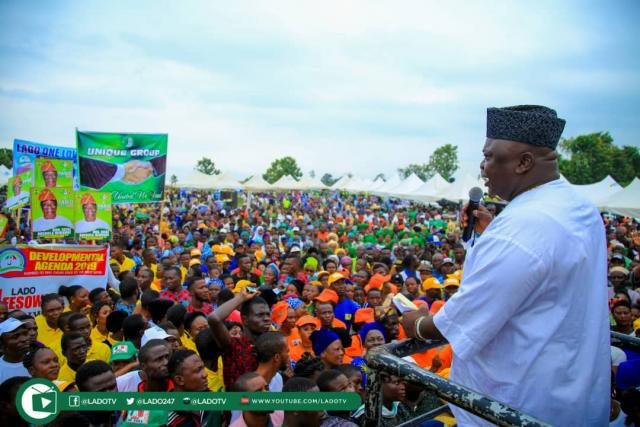 Party members across the LG turned out to express their loyalty and readiness to join hands with Hon Adebutu to move Ogun State forward come 2019.

The meeting had in attendance Ijebu political gladiators, aspirants for various elective posts, administrators and strategists of national repute. They all in turn spoke and expressed their readiness to work with Hon Ladi to liberate Ogun people from the shackles of poverty and backwardness of APC government.

In his remarks, Adebutu, stated his resolve to take the gateway state beyond the summit. He lamented the state of affairs in the local government administration of the state describing it as very sad and unfortunate. He attributed the ugly situation in the LGs to the visionlessness and irresponsibility of the APC led government.

He wondered how rural development would be achieved and life comfortable for the generality of the Ogun people when the third tier of government had collapsed. He, however, assured the party faithfuls of his resolution to return the effective functionality of LGs in 2019.

The federal lawmaker used the occasion to express his unalloyed solidarity with the continuous existence of Tai Solarin University of Education saying “it has come to stay.” Hon Ladi painted the attempt by the Ogun State Governor, Senator Ibikunle Amosun, to scrap the university in 2012 as not only retrogressive but wicked and shameful.

READ  How We Are Reducing Oyo State Infrastructure Deficit, Despite COVID-19 — Seyi Makinde

While commending the former Governor of Ogun State, His Excellency, Otunba Gbenga Daniel, for establishing the first University of Education in Nigeria, Adebutu told over two thousand Ogun state tertiary institutions students who came to identify with him that he was willing to make education accessible and affordable to the least poor. He admonished them to obtain PVCs as that would enable them to secure a better life for themselves.

As part of the programs for the familiarisation tour to Ijebu Ode LG, Hon Adebutu donated three 500KVA transformers to Isiwo, Ilupeju and Sabo/Molode communities. The aforementioned areas had experienced darkness over a long period of time. But with this development, the Oloritun of Sabo/Molode, Alhaji Kayode Saibu, said “the transformer replacement is a big relief for the beneficiaries as life. becomes more comfortable.” Unable to hide his admiration for the donor, Saibu described Hon Ladi as “a politician of unmatched sense of empathy and belonging.”

Hon Seye Sonuga, the Senior Legislative Aide to Adebutu, delivered the 500KVA transformer to Isiwo Ijebu on behalf of the principal.

No Money is Missing in Ogun

PHOTO: On Quarterly Meeting of The Southwest Governors’ Forum