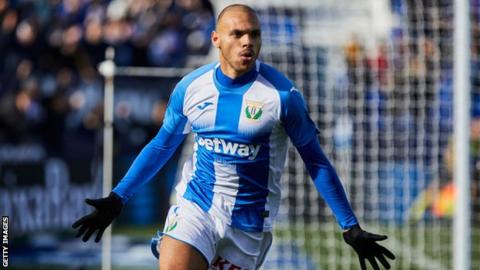 Barcelona’s new signing, Martin Braithwaite has said Messi is a footballing god and no other player can do the things he does on the pitch.

Martin said he has even refused to wash his clothes after getting hugs from the Argentine maestro because he is such an extraordinary player.

According to him, Messi controls the game and if football were a religion, the pacy and skillful forward might be God.

He added that the El Clasico promises to be an exciting and important experience for him as a Barcelona player.

His words, “Nobody can do things he does,”

“If football were a religion, Messi might be God.

“He controls the match. He is an extraordinary player.”

On the El Clasico, “It will be a magnificent experience. It is the most important game, and everyone follows it.

“There will be a lot of intensity, and I have a lot to win from playing in this game.”

On his new club, “My first training session with Barcelona was incredible,”

“Out of nothing, from being at Leganes I was suddenly here. But it felt very natural.”

Serie A Rivals Are Tough – Buffon

NDLEA Is Trying To Abduct Me – Buruji Kashamu