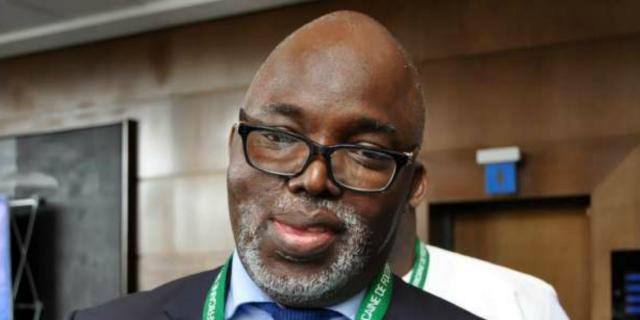 The Nigeria Football Federation (NFF) boss, Amaju Pinnick has come out to say that he is not in a hurry to contest the Confederation of African Football (Caf) presidential election.

Pinnick recently revealed that family is the most prized asset that he has and he would not do anything they do not support.

According to him, the process of becoming a CAF president is more complicated than expected and would even require the go-ahead from the government.

Amaju Pinnick added that he is not desperate since he still has a lot of time to pursue a career path in football administration in the future.

His words, “The truth is that you need to look at indexes, you have to look at your family – family is the most prized asset that I have – so for example if my family said “don’t” then I won’t,”

“Then you have your larger family which is your football family – your exco, your congress – if they decide to give you the go-ahead then you go to the government.

“You have to let them know that even if you get elected, we will need to look at the reality.

“What is the reality? There are a lot of things wrong fundamentally in Caf right now – our credibility is at the lowest ebb our integrity is nowhere to be found – so we have a lot of challenges unless we keep deceiving ourselves.

“Human beings make mistakes and the only way you can correct those mistakes is to ensure that you know you have made these mistakes and genuinely want to correct it if that’s the case we can’t sit there and do nothing.

“Nobody is in a hurry. I am not desperate, I am going to be just 50 in December so there is a lot of time for me if I want to pursue a career path in football administration in the future.”

It Will Hard For Tottenham To Keep Eriksen – Darren Anderton