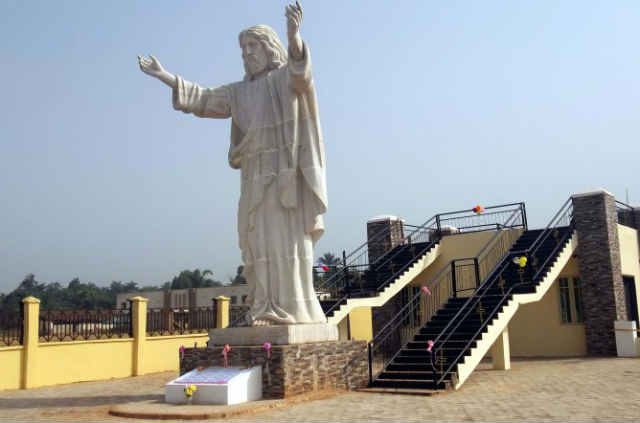 The statue made of marble is bigger than the 20 metres (66 foot) Ramesses ii Abusimbel statue in Egypt.

Ukwuoma Performed the ceremony shortly after a mass attended by the Bishop Emeritus of Orlu Diocese, Most Rev. Gregory Ochiagha, and more than 100 priests at St. Aloysius Parish Abajah compound on Friday.

Chief Obinna Onuoha, who donated the Jesus statue had constructed 2,000 seating capacity parish church at St. Aloysius in the year 2012.

The unveiling of the statue was used to mark the wedding golden jubilee ceremony of the parents of Obinna, Chief Geoffrey, and Lolo Justina Onuoha.

Ukwuoma, who described the statue as magnificent, commended the Onuoha family for the gift and their benevolence to the church.

“This statue is a great symbol of Christian faith, and I pray that for the Catholics that the statue will continue to constantly remind us of what Jesus Christ stands for us.

“For other passersby, looking at the statue will also bring them closer to Jesus,” the Bishop said.

Speaking on the golden jubilee, the cleric used the medium to remind marital couples on the need to see marriage as a vocation through which they could positively impact on the society.

“God did not call any of us clergy and religious to be fathers and mothers, but those called into this vocation must use it to reflect God’s peace, love and unity.

Chief Obinna Onuoha, the Managing Director of Premier Petroleum Ltd., and the donor of the statue, said that he constructed the statue to fulfill a vow he made to God in the year 1997.

“Asking why I constructed this statue is like asking how do I came to this world, I am a Christian and a Catholic and Jesus statue represents my faith.

“I believe we are here on earth for different purposes and each person moves with his/her instincts, and I was motivated to do this to build up the faith of this community,” he said.

Onuoha, who did not mention the cost of the statue, added, “it took about three years to construct and erect the Jesus De Saviour statue at Abajah.” [Imo/NAN]

Kourtney Kardashian Is Back With Scott Disick

Lateef Jakande Only Serve The People Under Abacha – Osoba