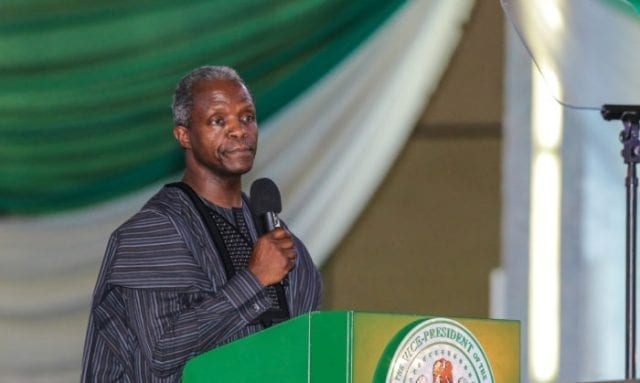 Yemi Osinbajo on Tuesday in Abuja wondered how a certain Jibril from Sudan would be presiding over the Federal Executive Council (FEC) meeting.

The misconception of Jibril, a purported body-double of President Muhammadu Buhari, has been rife in both conventional and social media lately.

Buhari himself had while fielding questions in Poland, cleared the air and debunked the claims that he was cloned.

Osinbajo expressed this shock at a National Consultative Forum organised by the National Committee of Buhari Support Groups (NCBSG) in collaboration with Council for New Nigeria Initiative.

He said that the fear of Buhari was making some detractors lose their senses.

According to the vice president, the present government is earning 60 per cent less than the previous government, yet it has spent N2.7 trillion on infrastructure, the highest in the history of the country.

He said that the Buhari-led administration had done much because it was not stealing money; was doing major roads in 36 states–Lagos Kano railway, Warri, Aladja, Mambilla, Port Hacourt, Maiduguri among others.

Osinbajo said that the government was feeding over 9.2 million children every day; giving 2 million petty traders a better deal in life with Tradermoni and had employed 500,000 graduates under the N-Power programme.

“We are giving about 300,000 of the poorest Nigerians N5000 a month. How? Because Buhari is the gate keeper he has stopped grand corruption.

“So despite the fact that we are earning 60 per cent less we are doing five times more. This is why there is a gang up by the discredited elite against him.

“They prayed for him to die, he didn’t die. When he came back hale and hearty by the grace of the Almighty God, they mourned while Nigerians rejoiced.

”The fear of Buhari makes these people desperate even crazy. So now they say he is Jibrin from Sudan. If you can’t discredit him say he doesn’t exist; they were all alive and well when Pastor Adeboye went to London and prayed for him the day before he returned to Nigeria.

“How will one Jubril sit in Federal Executive Council and conduct meetings, consult with his ministers, speak to me daily?

“Their strategy is simple, if you tell a lie often enough some will believe you; Buhari is not only alive and well, he will by God’s grace live long and well after his second term in office,” he said.

He commended the members of National Commitee on Buhari Support Groups, saying that they were the vanguard of the battle for the soul of Nigeria.

Liverpool’s Title Win Is A Matter Of When, Not If – Henry