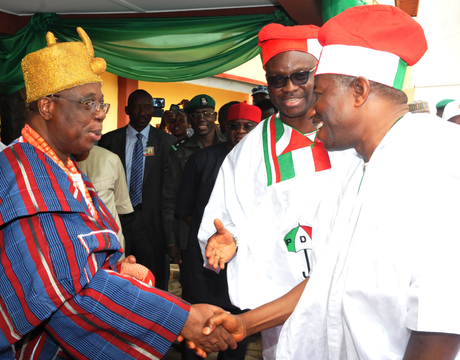 President Goodluck Ebele Jonathan has heartily congratulated the Governor-Elect of Ekiti State, Ayodele Fayose of the Peoples Democratic Party, PDP, on his overwhelming victory in Saturday’s governorship election in the state.

The president, in a statement signed by his Special Assistant on Media and Publicity, Reuben Abati, Sunday, also commended the Independent National Electoral Commission, INEC, the Security Services and the good people of Ekiti State for the successful and peaceful conduct of the elections, which he said is in line with his administration’s avowed commitment to ensuring that elections in all parts of Nigeria are progressively freer, fairer and more credible.

“As Mr. Fayose readies himself to assume office in fulfilment of the clearly expressed wish of his people, President Jonathan urges him to be humble and magnanimous in victory and commit himself to forming an administration that will work for the advancement of the interests of all Ekiti people irrespective of their political affiliations or loyalties”, the statement said.

President Jonathan also called on Fayose “to regard his second chance to serve as Governor of Ekiti State as a sacred mandate from God Almighty and his people which he must discharge with immense dedication, wisdom and vigour to achieve a much more rapid pace of socio-economic development in Ekiti State for the benefit of its people, who resoundingly reaffirmed their trust in his leadership by voting overwhelmingly for his election yesterday.

“The President assures Mr. Fayose that the Federal Government will give all necessary support and assistance to his incoming administration and cooperate fully with him in furtherance of the present administration’s objective of significantly improving the living conditions of Nigerians in all parts of the country”, Abati said.

Cobhams Asuquo – “Don’t Sell Your Vote Because Of Rice &...

Good Men Must Rise Up And Make A Difference In This...

We Are Not Signing Ronaldo – Uli Hoeness