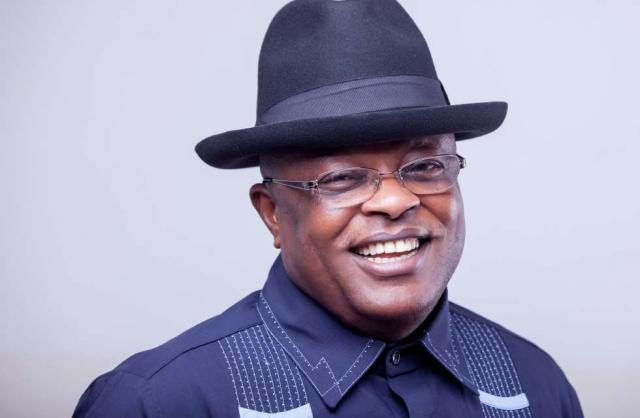 Ebonyi State governor, David Umahi has said with the way Nigerians are now focused on holding leaders accountable, no leader can afford to disappoint his or her people when he or she assumes a position of power.

He revealed this as he delivered a lecture titled “Changing the Face of Governance through infrastructural and human capital development: Ebonyi State as a case study” at Princess Alexandra Auditorium of University of Nigeria, Nsukka.

He added that leaders must offer an environment for private sector initiatives and social security needed for the prosperous and healthy living of its people.

His words, “This is because as leaders, we can no longer afford to disappoint our people. The society requires from us security and safety of the citizenry, we need to engage our teaming graduates and youths in dignifying means of livelihood, we need to provide the environment for private sector initiatives, we need to provide the social security required for prosperous and healthy living for our population and the enablement to take our destiny in our hands.”

“The organization and promotion of private sector investment, the raising of the productivity of the people by improving their skills, enterprise, initiative, adaptability and attitudes, guaranteeing the tenets of democracy and principles of constitutionalism.”

“Ebonyi State upon creation was faced with developmental challenges ranging from lack of physical, social and economic infrastructure, and also lack of Human Capital Development.

“We had the worst Road infrastructure, Health Care was in a shambles, rural communities were cut off from the urban and that encouraged rural-urban migration and street hawking. Communal conflicts were high, agriculture was still by crude practice, empowerment and security had negative profile.

“We had no confidence in ourselves. This was our situation until the coming on board of the 3rd Civilian Governor of Ebonyi State.”

On his achievements as governor, “300 km concrete pavement in all the Local Government areas with bridges were not already connected 500 km Federal roads especially the major routes some of which are by concrete pavement.

“Over 1500 km State roads within the metropolis and the satellite towns. 12 number fountains, beautiful roundabouts and branded perimeter fencing of Major Streets.

“Built the longest and most aesthetic flyovers in the Southeast, with 3-number of such having a total of 96 spans built in 3-years and has commenced another construction of 8 flyovers in strategic junctions with dual carriageway done in the concrete pavement in major highways of the 3 senatorial zones to attract investors.

“Built a President Buhari light Tunnel with 29 spans, with aesthetic lights that shine in the night to make Ebonyi State investment-friendly and promote night trading. Renovated the State Stadium with ancillary work and built Guest House for accommodation of athletes and has commenced construction of one of the best Stadia in Nigeria.

“Is constructing the biggest shopping Mall that will be the microcosm of the macrocosm of the Dubai Mall, to create market and stimulate provision of goods and services. This Shopping mall will attract International trade and investment and shall create not less than 3000 jobs and generate thousands of wealth.”

Election Materials Arriving Late In Bayelsa Is An Indictment On INEC...

Yusuf Takes Over From Omozoje As Commandant Of Guards Brigade In...