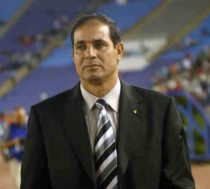 He replaces Hassan Benabicha, who held the position in an interim capacity.

The 55-year old, who first tenure in charge of the Moroccan national team lasted between 2002 and 2005, will see the team through to the 2015 Orange Africa Cup of Nations, which the North African country will be hosting.

FRMF president Fouzi Lekjaa made the announcement at a press conference on Friday (2 May 2014) in Rabat.

Badou was a member of the Atlas Lions squad that progressed from the group stage of the 1986 World Cup, the first by an African team, a year in which he was also named African Footballer of the Year.

He will be assisted fellow past internationals, Mustapha Hadji and Said Chiba whilst Khalid Fouhami will act as goalkeepers trainer. Aziz Bouderbala will serve as Coordinator of the team.