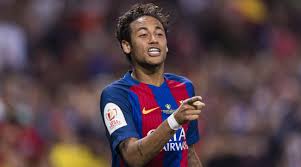 Barcelona coach Ernesto Valverde once again insisted that Neymar is going nowhere after the Brazilian starred in Saturday’s 2-1 win over Juventus in the International Champions Cup.

After a week in which Neymar’s looked ever closer to Paris Saint-Germain, with a source said an agreement on personal terms has already been reached, he scored two stunning first-half goals at MetLife Stadium.

However, the focus turned immediately back to Neymar’s future once the final whistle blew and to the claims that PSG are set to pay his €222 million release clause.

“Barca are not going to go without Neymar,” Valverde stressed after winning his first game in charge since replacing Luis Enrique at the end of last season.

Neymar himself left the stadium after the game without saying a word, stopping briefly to take photographs with a few supporters in the mixed zone.

Meanwhile, his father, who is also his agent and has reportedly held numerous talks with PSG over a transfer, left the stadium in a car with a number of Barca board members, with Diario Sport reporting the club are desperately trying to convince the player to stay.

The drama surrounding Neymar’s future took away from what was an encouraging start to Valverde’s career at the club.

Against Juventus, Barcelona impressed with their pressing, while there were also good performances from young midfield players Sergi Samper and Carles Alena.

“I take a lot of good things out of that game,” Valverde said of his first match in charge. “Above all the application of the players, everyone was together.

“We took the initiative in the game, playing further forward with the intention of dominating the play against a strong rival.”

On Samper, whose future at the club next season is not set in stone, he added: “He did well. He had a difficult season last year on loan with a team which had a lot of problems, so we’re going to evaluate [his situation].

“He will do preseason with us, which is a test not just for him, but for everyone, and then we will speak with him and we will make a decision.”

Salah Can Keep His Standard – Klopp