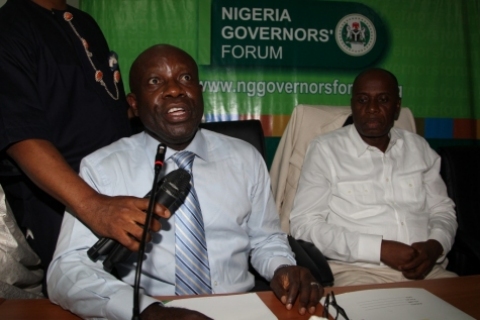 The Nigeria Governors’ Forum, NGF, has congratulated and welcomed all new and returning governors.

The NGF in a statement by its Director General, Ashishana Okauru, on Thursday said it is especially elated that winners have emerged in almost all the states.

“While we congratulate the winners and urge them to be magnanimous in victory, we kindly urge the other contestants to be gallant and gracious in defeat”, it said.

The Forum, which comprises of all the 36 democratically-elected State Governors in Nigeria, also said it recognizes, as reported by Independent National Electoral Commission, that a number of states recorded violent incidents at polling units causing the death of the Commission’s officials and voters.

See also  Poverty Forced My First Wife To Run Back To Her Parents House, Says Suspect Arrested With 3.870kg Drug At MMIA

“May the souls of all those that died rest in eternal peace”, the NGF prayed.

The NGF, which became polarized at the height of its chairman, Governor Rotimi Amaechi of Rivers State’s political battle with President Goodluck Jonathan, advised all aggrieved candidates to seek legal redress within the parameters set by the country’s laws, rules and regulations.

The Forum said it “assured all governors-elect of absolute loyalty and support. We look forward to a fruitful partnership with the new state Chief Executives. By the victory at the April 11, 2015 governorship election, the governors-elect have become automatic members of the NGF.

See also  Boko Haram: We Are In A War Situation – Jang

“We pray to God to give them the wisdom, knowledge and understanding to govern their respective states”, it said.

I Used To Be A Bus Conductor – Jude Okoye

Fashola, Others Have To Re-Register For Permanent Voters Card – INEC