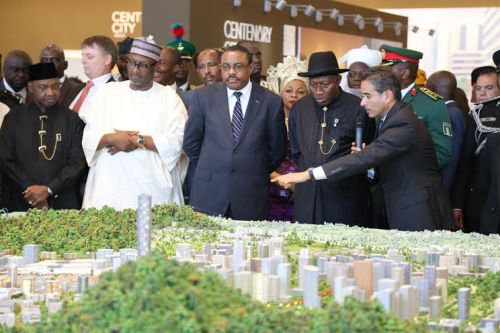 A group, Empowerment for Unemployed Youths Initiative, has asked President Muhammadu Buhari to review the Federal Government’s commitments to the Abuja Centenary City project which it described as a fraud conceived to undermine the national economy.

According to the group, among the abuses was the relocation of a military base at the cost of N2 billion to the government for the purpose of accommodating the privately owned project.

In a petition to the president, the group listed former Secretary to the Government of the Federation (SGF) Senator Anyim Pius Anyim as a facilitator of the project who used his powers to the benefit of the privately-owned scheme to the detriment of the nation.

“Mr. President, are you aware that a military base was relocated out of the Centenary City zone at the cost of 2 billion naira at the expense of the Nigerian Government. This 2 billion naira belongs to the commonwealth of Nigeria. Mr. President, are you going to allow these monies remain in the hands of Anyim and his cohorts – the soldiers of fortune?

“Mr. President, we refer you to the NEPZA (Nigerian Export Processing Zone Act) 1st schedule Section 3(5) sub 4.1 and it states ‘the fixing of the Seal of the Authority shall be authenticated by the signature of the Chairman and of any other Member authorized generally or specifically by the Board to act for that purpose’. Mr. President, ask the Centenary City to produce the approval of the NEPZA Board for the licensing of the Centenary City as a free trade zone. Mr. President, this is a criminal breach of trust. This must be scrupulously investigated.

“Mr. President, we refer you to the NEPZA Act Section 5 (8) and it states ‘approved enterprises operating within a free trade zone shall be exempted from all Federal, State and Government taxes, levies and rates’.

“Mr. President, by illegally licensing the Centenary City a free trade zone, the promoters are desirous of taking advantage of the Section 5 (8) as quoted above. Mr. President, the implication of this is that for every one job created, we the Youth of Nigeria will lose 0ne thousand jobs. Secondly, the industrial development we crave will never materialize.

“Thirdly, the contractors in the free trade zone are taking advantage of the above to import into the country equipment, cement and labour. Mr. President, are you telling Nigerians that you are going to allow this?

“How will the City operate when you need ingress and exit visas to visit the zone. Mr. President, in UAE where you have the free trade zones, the land is owned 100 percent by the government, Nigeria cannot be exempted and there is nowhere in the world where a residential city is a free trade zone. If this is allowed it will damage our economy,” the group said.

I Enjoy Playing With My Teammates At Man Utd – Pogba

No Place For Muller In Bayern Munich – Lothar Matthaus

I Love Busola Dakolo With All My Heart – Timi Dakolo