When hundreds of protesters gathered outside Japan’s embassy in Yangon during the height of nationwide anti-coup protests in February, Ambassador Ichiro Maruyama emerged from the gates with a firm warning for the junta: Release the detained civilian leadership “immediately.” 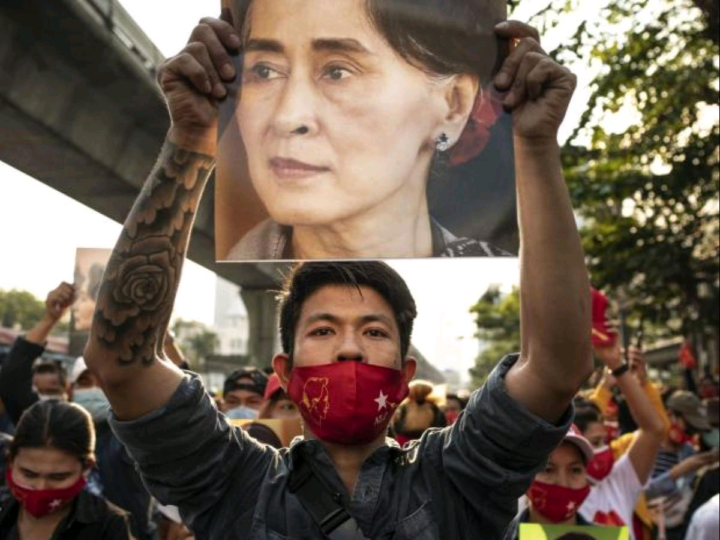 The remarks, delivered in Burmese, drew applause from pro-democracy demonstrators hoping Japan would take concrete action to pressure Myanmar’s military, also known as the Tatmadaw. But since then Japan has resisted calls to impose sanctions or suspend ongoing infrastructure projects, saying only it would avoid carrying out any new non-humanitarian deals with the junta.

Yusuke Watanabe, secretary general of the influential Japan-Myanmar Association — a group stocked with top Japanese politicians and business leaders — wrote in an opinion piece last month that Tokyo “must position itself as a bridge between the Tatmadaw and the United States and other democratic countries rather than blindly aligning itself with the Western policy of regime change.”  Watanabe, the son of a former cabinet minister, touted himself as “one of the few foreigners in constant contact” with coup leader Min Aung Hlaing.

Japan’s reluctance to put financial pressure on the military shows the difficulties President Joe Biden faces in convincing U.S. allies in Asia to put real teeth behind calls to defend democracy, a key theme he expressed last week at the Group of Seven summit and other stops in Europe.
For Japan and India in particular — two countries along with Australia that make up the U.S.-backed Quad grouping — tough measures against the junta only risk increasing the regional influence of China. They’ve also avoided joining Western democracies in sanctioning Chinese officials over alleged human-rights abuses in Xinjiang.

Japan has urged the military cease violence, release those taken into custody and restore democracy. On June 8, lawmakers in the country’s lower house passed a resolution condemning the military takeover.
“Within the international community our country has many routes of communication with Myanmar, including the Myanmar military,” a Japanese Foreign Ministry official said by phone in response to written questions. “We understand that many countries, not just ours, are considering what is the best way to deal with this, based on the situation.”

Still, the country also has a history of defending Myanmar generals. In 2019, Ambassador Maruyama said “there is no genocide in Myanmar” in response to a case at the International Court of Justice over allegations of atrocities on its Muslim Rohingya population in western Rakhine State. “We fully believe that the Myanmar military will keep its promise” to prosecute anyone who committed human-rights abuses, the Irrawaddy quoted him as saying.

One major factor preventing Japan from taking harsher measures is concern over ceding influence to China. Beijing has blocked uniform sanctions at the United Nations Security Council and said its policy toward Myanmar was unaffected by the coup, granting the regime legitimacy on the world stage.

“Given how much money they have put in, and the fact that they see it as geo-economic competition with China, they are very hesitant to pull out,” Simon Tay, chairman of the Singapore Institute of International Affairs, said regarding Japan.
Japan’s ties with the Southeast Asian country go back to World War II, when the regime in Tokyo helped revolutionaries led by Aung San — father of modern Myanmar and the now detained civilian leader Aung San Suu Kyi — form the Tatmadaw in its fight for independence. While Japan later occupied Myanmar until 1945 and Aung San turned against them, the countries have maintained close relations even under long periods of military rule.

When Myanmar ushered in sweeping political and economic reforms about a decade ago, Japan was rewarded with high-status projects, joining with public enterprises to establish the Yangon Stock Exchange and the country’s only operational special economic zone.

As of April, Japan was its third largest foreign investor nation behind Singapore and China, with nearly $2.4 billion in capital since the 2016-17 fiscal year, according to data from Myanmar’s Directorate of Investment and Company Administration.

But since the Feb. 1 coup, companies have come under intense pressure to back away from investments tied to the military after security forces killed hundreds of protesters.

Among them is Kirin Holdings Co., which said days after the coup it would end its joint-venture partnership with military-run Myanma Economic Holdings Public Co. in the country’s largest brewer after buying a $560 million majority stake six years earlier. In a statement, the company said it’s “taking urgent steps” to terminate the arrangement but didn’t have a timeline yet.

Mitsubishi UFJ Financial Group was listed in a December report by Justice for Myanmar among international companies connected to Telecom International Myanmar Co. Ltd., or Mytel, a company the U.S. Department of the Treasury said was set up by Min Aung Hlaing. A Mitsubishi spokesperson said the company doesn’t comment on individual businesses.

Justice for Myanmar alleges that Mytel’s biggest shareholder, Viettel Group, which is owned by Vietnam’s Defense Ministry, mines user-data that could be used for military purposes by the Myanmar junta. The regime had also ordered operators to shut their networks in an effort to stifle protests following the coup. A Viettel spokesperson said the company would not comment on the issue, while Mytel didn’t respond to multiple requests via email and phone for comment.

The Japanese government is more concerned with economic and human security in Myanmar than punishing the military with coercive moves, according to Moe Thuzar, a fellow at Singapore’s ISEAS-Yusof Ishak Institute

“The half measures here are probably intended as negotiation points toward a constructive outcome,” she said. “The risk here is of course the military junta manipulating any space that it is given, or deciding to ‘walk with fewer friends.’”