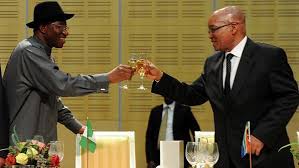 Nigeria, Sunday became Africa’s largest economy, after a long overdue rebase calculation of its GDP almost doubled it to $500 billion, according to data from the West African country’s Bureau of Statistics.

Rebasing is done at least every three years by most countries as a way of ensuring a nation’s GDP statistics give the most up-to-date picture of an economy as possible. Unlike these other countries, Nigeria had not updated the components in its GDP base year since 1990.

Nigeria’s 24-year-long wait was said to have been caused by many factors, most importantly debt relief. A planned rebasing in 2010 was shelved to pursue debt relief from the Paris Club and multilateral lenders, as a review would have created a better economic image for Nigeria which would have made its case for relief from lenders a bad case.

Having gotten the debt relief in 2010, the country today enjoys one of the lowest debt to GDP Ratios, with a GDP growth that has been one of Africa’s highest in recent times, averaging 7 per cent per year.

Sectors such as Telecommunications, aviation, e-commerce and Nollywood film industry have now been factored in to give a better and more accurate picture.

The new figure ($509.9bn, according to Nigeria Bureau of Statistics) makes Nigeria the 26th largest economy in the world, and could see it replace South Africa as the continent’s only G20 member.

The economic growth is however not felt by the country’s masses. The World Bank in its most recent poverty survey reported that 61 percent of Nigeria’s 170 million people live on less than a dollar a day. Infrastructural inadequacy still reigns in Africa’s most populous nation bedevilled by poor governance, widespread corruption, rampant oil theft and a raging Islamist insurgency in the north.

According to Chief Statistician, Yemi Kale, figures should not be seen as an end in themselves but should be used to help the government shape policy for the future.

I Will Stop Importation Of Basic Items – Buhari

UN Committee on the Rights of the Child to review Venezuela,...

I Dd Not Watch Game Of Thrones – Tiwa Savage