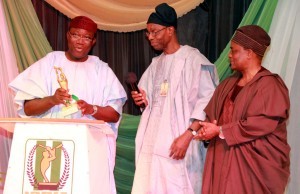 Ekiti State Governor, Dr Kayode Fayemi, has described the Nigerian Press as a beacon of hope and renewal in the national experience, saying that the media has always been at the  vanguard agitation for justice, equity and development in the country.

Speaking at the 2013 Nigeria Media Merit Award held at the  Ikogosi Warm Springs Resort, Ikogosi- Ekiti Saturday night, Governor  Fayemi said he had observed how vibrant and effective the media could crusade against injustice and lend its weight behind the course of truth while also advocating the best for the people.

Dr. Fayemi who was once a journalist, stressed that the media has a very sacred role in enabling the attainment of the desired Nigerian as the only formal institution granted an oversight function on the government, its activities and organs by the constitution.

“Since nations are essentially narrated entities, the media has been the crucible holding together the narrative of the directions or tangents that our reality has set on, while showing this up as evidence of how much progress or regress the nation and its citizens are making towards the objectives of society. The media is the quintessential witness to truth and justice, the anticipated arbiter on the side of Truth and its messenger”, he said.

READ  The PDP Under My Watch Is Very Powerful — Governor Ugwuanyi

The Governor described the NMMA award as a celebration of the remarkable openness that the country has achieved since the return to a more democratic dispensation which has broadened the space for citizens to offer their views on the state of the polity while the media still carry out the pursuit of informing without fear or victimization.

While speaking on the hosting of the event, Fayemi highlighted steps taken by his administration to make the State a destination of first choice for business and pleasure as evident in the infrastructure put in place in all parts of the State especially the Ikogosi warm spring resort which hosted the event.

In his remarks, the Chairman Board of Trustees of the Award, Engr. Vincent Maduka explained that the NMMA has 53 categories of awards distributed between Radio and television and the print media from which the panel of assessor meticulously evaluated the entries from media professionals and selected the very best entries adjudged as winners in each of the categories.

Maduka expressed optimism that more challenging and valuable prizes would unfold  in the near future to attract more Nigerians from within and outside the country.

He thanked the State Governor, Dr Fayemi and the hospitable people of the State for making the event a success, adding that the state is indeed the Land of Honour.

At the event attended by the Deputy Governor of Ekiti State, Prof. Modupe Adelabu, former Minisiters, Chief Ayo Ogunlade and Femi Fani Kayode among others,  The Nation emerged the Newspaper of the year while Channels Television  was named Television station of the Year. 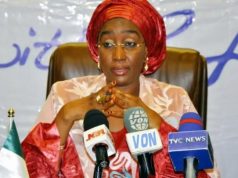 Juliet Ibrahim Is Not Taller Than Me – Iceberg Slim