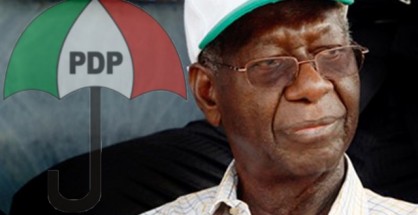 The National Campaign Adviser of the Peoples Democratic Party, PDP, Chief Tony Anenih, has said only the ruling party can guarantee Nigeria’s unity and advancement.

He also declared the party’s candidate in the February 14 presidential election, President Goodluck Jonathan, as the best among the lots seeking to occupy the highest political office in the country.

In a statement on Tuesday, Mr. Anenih, who is also the Chairman of the PDP Board of Trustees, BoT, said in the run-up to the presidential poll, some Nigerians at home and abroad were already questioning the ability of the country to conduct the election without further exposing her existing fault lines and plunging the country into violence and chaos.

Acknowledging that these concerns were not without foundation, Anenih said he had no reservation whatsoever in assuring Nigerians that, whatever the odds may be, Nigeria would keep moving forward in unity.

“As the Chairman of the Board of Trustees of the Peoples Democratic Party, I am unwavering in my belief that the unity and advancement of our country is better protected by the PDP than by any other party”, Mr. Anenih said.

“In the past four presidential elections, many of you, my fellow compatriots, agreed with me and voted our party to victory. For this privilege you’ve repeatedly given our party to steer the ship of state since our nation’s return to democracy in 1999, I thank you once more. I am also calling on you, fellow compatriots from the North, South, East and West, to once again vote the PDP in 2015”.

The PDP BoT chairman stated that it was a matter of verifiable fact that the PDP, besides faithfully discharging its foremost duty to Nigeria of sustaining a stable, functional state, had recorded many achievements in agriculture, aviation, education, roads, railways, Industrialisation, women and youth empowerment and many other areas.

READ  Fashola Has Failed And Should Be Sacked — Northern Elders

Mr. Anenih, however, agreed that much still needed to be done to consolidate on what the PDP-led federal administration had already begun.

He stated, “Indeed, it is precisely because we need to build more on what we’ve already done that we seek the support and mandate of Nigerians from the North, South, East and West to once again vote President Goodluck Ebele Jonathan for a second term in office and the PDP in order to keep moving Nigeria forward in unity”.

Anenih noted that in the heat of the ongoing campaign, it was easy for significant accomplishments recorded by the Jonathan-led PDP government to go unremarked.

He also noted that very few speak about the revolution in Almajiri Education in the North brought about by the president, which had so far seen the completion and commencement of more than 150 purpose-built schools integrating Almajiris into the regular education scheme while many more of these schools were under construction.

Additionally, the PDP campaign adviser said fewer people speak about how the present administration had completed the dredging of the lower River Niger from Baro in Niger State to Warri in Delta State.

According to him, over 6.7 million passengers and over 1.6 million tonnes of cargo had been moved through this channel in less than three years, proving that Nigerians from the North and South were travelling and trading with one another and should stand together to ensure that was kept moving forward in unity.

He also reminded Nigerians that the PDP had successfully carried out a strategic restructuring of what was largely a state-run economy to a free-market economy, thereby engendering greater human development, free enterprise and irreversible economic expansion.

“These policies have created new jobs and empowered Nigerians from the North, South, East and West, thereby fostering more inclusive economic growth, especially in Agriculture and the Small and Medium Enterprises sector through programmes such as SURE-P and YouWin”, he said.

“It is a universally-acknowledged principle that inclusive economic growth for the populace is the best guarantee that we have not only for our political and democratic stability, but also in ensuring that Nigeria keeps moving forward in unity”.

Mr. Anenih said with the support of Nigerians and a renewed mandate at the polls, “President Jonathan, who is the best candidate in the forthcoming presidential election and the PDP, shall redouble their efforts to stem the evil tide of terrorism and insurgency, fast track greater access to qualitative education across the country, pursue an even more aggressive infrastructure development programme, while still safeguarding the democratic ideals of free speech and liberty which we all enjoy today”.

He, therefore, urged Nigerians to turn out en-masse to vote the PDP presidential candidate “irrespective of tribe, religion, region, or political affiliation, to eschew all forms of mudslinging, disorder, and violence.

“Let us prove the naysayers wrong. Let us show the world that as Nigerians, regardless of our differences, we are determined that Nigeria must keep moving forward in unity!”

Amazing! This Pretty Lady Was Once A Man [PHOTOS]

Realty Point Inc Releases Third in a Series of Guides for...