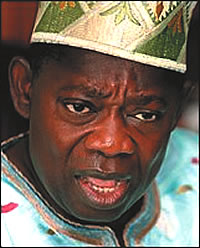 Former President Olusegun Obasanjo has hailed the contributions of his kinsman and presumed winner of the June 12, 1993 presidential election, Chief Moshood Kashimawo Olawale Abiola, to national development, saying the late philanthropist and businessman paid the supreme price for the country.

The duo, who made this known yesterday, lamented that Abiola’s failed mission to reclaim his stolen mandate scuttled Ogun’s quest of producing three different presidents of Nigeria.

Aside Mr. Obasanjo, who first ruled as a military head of state from 1977-1979 and twenty years later as a democratically elected president from 1999-2007, former Head of the Interim National Government, Chief Ernest Shonekan, also from the Gateway state, presided over the affairs of the nation even though it was for less than three months.

Obasanjo, who was a guest at the event, was reacting to a remark by the Alake of Egbaland, Oba Gbadebo that Ogun State could have produced three presidents if not for what he termed “bad belle” (envy).

Obasanjo said: “As Kabiyesi has said that Ogun State would have produced three presidents if not for ‘bad belle’. I want to agree with him that Abiola sacrificed for the nation.

The former President lamented that were it not for “bad belle”, the state would have had the rare luck of producing three presidents but the prospect of achieving that feat was scuttled by those he alleged were not favorably disposed to the record.

Mr. Obasanjo’s remarks came ahead of the 21st anniversary of the annulled June 12 election, which was widely believed to have been won by Abiola but was annulled by the military junta led by Gen. Ibrahim Babangida (retd).

Man United Is The Team To Beat – Ian Darke

No PPE, No Treating Of Coronavirus Patients – Lagos Doctors