An Osun State based Civil Society Organization (CSO), the Civil Societies Coalition for the Emancipation of Osun State (CSCEOS) has uncovered how the National Judicial Council (NJC) allegedly forged its rule from 2014 Revised rules and regulation to 2016 Revised rules and regulations to act the script of the Vice-President, Yemi Osinbajo and Governor Rauf Aregbesola to ensure the untimely exit of the incorruptible Judge of the State High Court, Justice Olamide Folahanmi Oloyede for writing a 39 pages Petition Letter to the State House of Assembly, alleging Aregbesola of financial impropriety of public funds, from the bench at all cost, calling for the disbandment of NJC for its greediness and unprogresivism.

The group however called for immediate arrest and possible prosecution of all the culprits involved in this another forgery saga in the Nation’s Judicial Arm of government, alleging financial inducement of the leadership and members of the National Judicial Council (NJC) with its Panel led by Justice Ibrahim N. Auta, through a project tagged “Operation Save Rauf Aregbesola Project (OSRAP)” where N4.7billion were raised in June 2015 by Osinbajo, APC Governors and the ruling party National Leader and former Governor of Lagos State, Senator Bola Ahmed Tinubu, to perpetrate their dastard act.

The group then appealed to the men of good conscience to reject and condemn the final verdict of the National Judicial Council(NJC) on Justice Oloyede which it described as act of conspiracy, mis-carriage of justice and misuse and abuse of power by the so-called elected public office holders to subjugate the innocent masses of the country, calling on President Mohammadu Buhari to urgently constitute an independent and unbiased panel of inquiry into this matter that has the capacity to rubbish his anti-corruption crusade.

Reacting to the NJC’s Acting Director of Information, Mr. Soji Oye on behalf of its Chairman and Chief Justice of Nigeria (CJN), Justice Mahmud Muhammed which hinged its disciplinary action against Justice Folahnami Oloyede on the Rules 1(1) and 5 of the 2016 Revised Code of Conduct for Judicial Officers of the Federal Republic of Nigeria, while the 2014 Revised Judicial Discipline Regulations were invoked when the unsubstantiated judicial misconduct was allegedly committed by the incorruptible Osun jurist.

Addressing a Press Conference at the NUJ Correspondents’ Chapel, Fagbewesa, Osogbo on Wednesday, the Chairman of the group, Comrade Adeniyi, Alimi Sulaiman insisted that the apex body of bencher threw the caution and sense of good judgment into the wind by succumbing to the pressure and heavy money inducements from the State governor and its agents to pervert the cause of justice for attending to the July 2015 Petition Letter of the Aregbesola’s group under the aegis of Osun Civil Societies Coalition (OCSC),which was signed by the trio of Waheed Lawal, Sikiru Adebayo Bello and Ismail Uthman respectively, seeking Oloyede dismissal from the bench.

According to the text of press briefing; “31st August, 2015, NJC published ‘2014 Judicial Discipline Regulations’ which came to force on 3rd November, 2014 in national dailies in which it clearly stated that no petitions will be treated without first investigating the integrity of the petitioners. This guideline subsisted throughout the period during which the Justice I.N. Auta led panel was hearing the depositions of the judge and members of the Civil Societies Coalition for the Emancipation of Osun State on the petition by Waheed Lawal and Co.

“September 2015 the Civil Societies Coalition for the Emancipation of Osun State, our organization, wrote a counter-petition against the Waheed Lawal petition in which five of our members swore to an affidavit proving that Waheed Lawal and his co-travelers who signed the petition on which the NJC based its verdict had criminal cases hanging on them. Waheed lawal led the fake and unaccredited Osun contingent that were sent by Mr. Rauf Aregbesola to disrupt the peaceful November 16, 2013 Anambra State governorship elections.

“Sikiru Bello still has an attempted murder case over the Ataoja Obaship tussle since 2010 on his neck while Ismail Uthman is a permanent staff of Aregbesola owned local media outfit, “Osun Defender” newspaper. January 25, 2016 to April 2016; Five members of our coalition and one retired judicial officer appeared before the Justice Ibrahim Auta panel to give evidence in defence of Hon Justice Olamide Oloyede’s petition and prove beyond reasonable doubt that the authors of the petition against her, are people of questionable character who are on the payroll of Mr. Rauf Aregbesola. We also affirmed that her action as a citizen of the Federal Republic of Nigeria was in accordance with section 39 (1 & 2) of the amended 1999 constitution”.

It further stated that “We were very shocked to hear and read that despite the fact that throughout the proceedings, ‘NO COUNTER AFFIDAVIT’ was deposed to by the petitioners to refute the grave allegations of criminality leveled against them before the AUTA led panel, the panel went ahead to recommend the compulsory retirement of an incorruptible, intelligent and courageous jurist, Hon. Justice Olamide Folahanmi Oloyede. Most worrisome is the fact that the NJC at its 77th meeting, which held on 15 July, 2016 under the Chairmanship of the Chief Justice of Nigeria, Justice Mahmud Mohammed ratified this recommendation saying that ‘The allegations against the Hon. Judge constitute a misconduct contrary to Rules 1 (1) and 5 of the 2016 Revised Code of Conduct for Judicial Officers of the Federal Republic of Nigeria.

“We put it to the leadership of the NJC that the so called 2016 Revised Code of Conduct for Judicial Officers of the Federal Republic of Nigeria were masterminded by a cabal in the judiciary and executive arm of government determined to ensure Oloyede’s exit from the bench of Osun state. We maintain that Hon. Justice Oloyede and a few others like her left in the nation’s judiciary represent the hope of justice for the common man and as such we will not relent in using all available sophisticated democratic and legal weapons locally and internationally to redress this injustice in the temple of Justice”.

Sulaiman was quoting as saying that “I will like to go personal and natural; the era of judicial conservatism has gone for good in Nigeria and this development is a national embarrassment and unacceptable, for the apex body of the bench( NJC) that should be live above board, to be forged its rule to satisfy desire of certain individuals in government of the day, it means, no hope for the common man on the street again as justice is not for the people but for the highest bidders. I want to challenge those involved in this manipulation of justice against the heroine of Nation’s Judicial arm, Justice Olamide Folahanmi Oloyede; including Yemi Osinbajo,Rauf Aregbesola,Suraju Ajibola Bashiru,Waheed Lawal,Bola Ilori and host of others to come to public and swear with the lives of their children that the NJC report on Oloyede were not bought and manipulated . With this singular action, National Judicial Council (NJC) should be disbanded for its greediness and unprogressivism”. 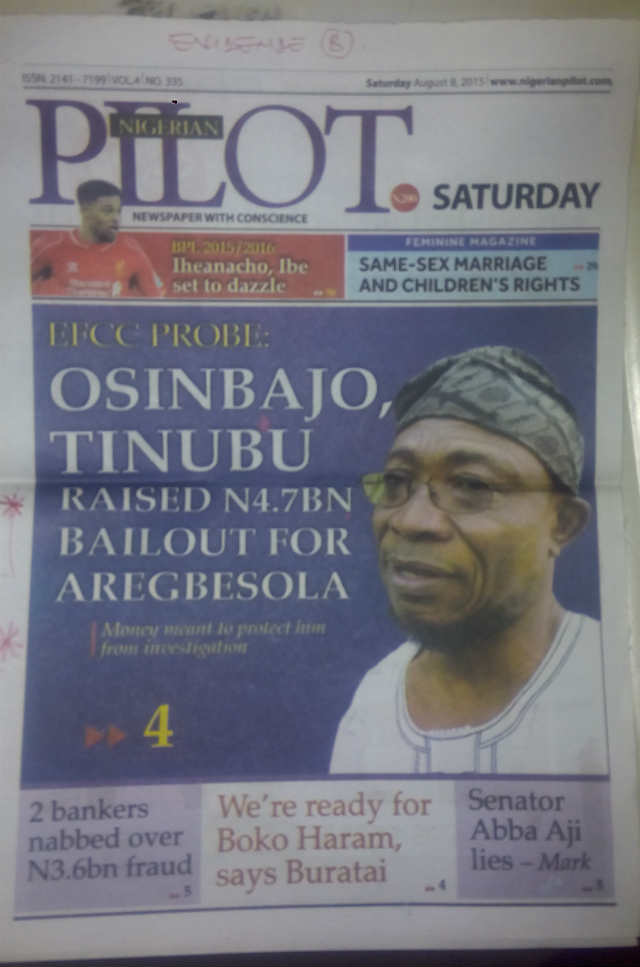 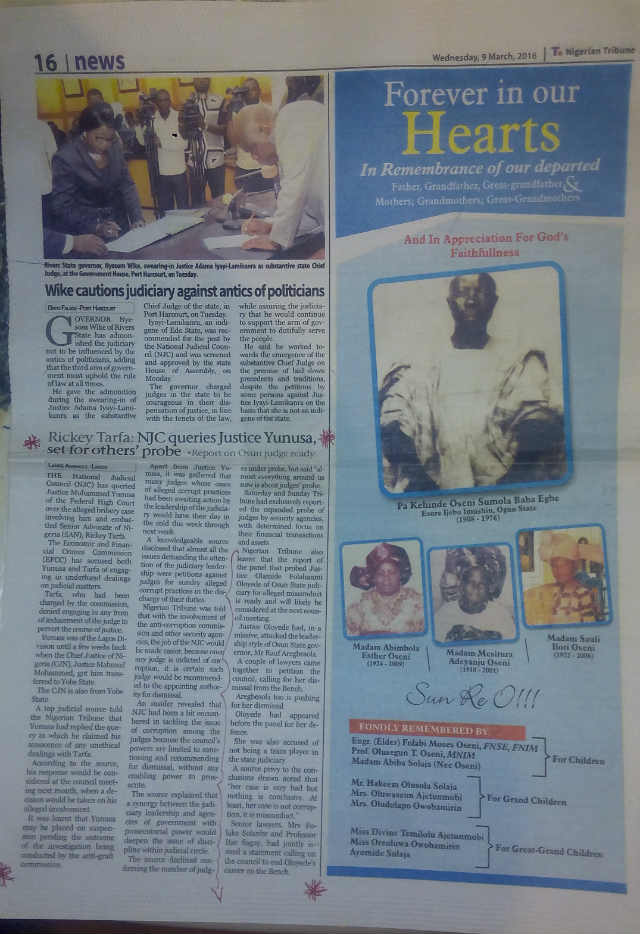 US House Republicans launch probe into chaotic exit from Afghanistan

Maguire Knows The Club And His Teammates Support Him Fully – Rangnick