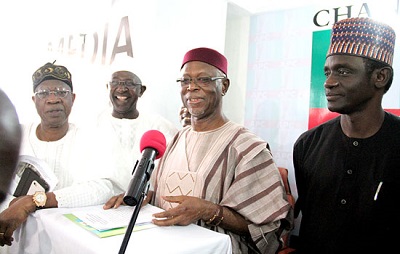 The All Progressives Congress (APC) has said only its National Chairman, Chief John Odigie-Oyegun, and its National Publicity Secretary, Alhaji Lai Mohammed, are authorised to speak on national issues on behalf of the party.

In a statement personally signed by the party’s national chairman on Friday, the APC said the clarification had become necessary as those it called authorised persons had been “issuing statements” on behalf of the party.

The statement said, “It has come to the attention of the leadership of the All Progressives Congress that unauthorised persons have recently been issuing statements on behalf of the party.

It, therefore, directed its state publicity secretaries to restrict their statements to issues concerning their various states, urging all the concerned officers to adhere to the directive.

Rotimi Akeredolu Did Not Appropriate N795m For Gifts – APC