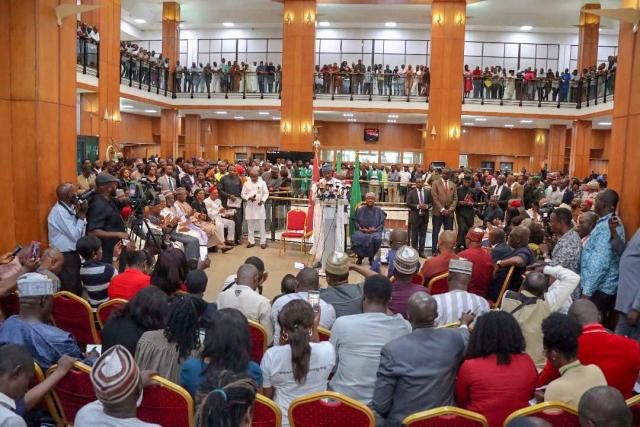 After the noisy session of the joint session of the Nigerian Senate and the House of Representatives during the presentation of the 2019 budget by President Muhammadu Buhari, the Muslim Rights Concern (MURIC) has accused the lawmakers of political imbecility.

According to Ishaq Akintola, a professor, the director and founder of the human rights organization who signed the press release, the manner on show by the lawmakers was infantile, pedestrian and ludicrous.

“Our lawmakers manifested articulated immaturity and exhibited pronounced desertification of parliamentary decorum. They desecrated the hallowed chamber. It was such a shame of a National Assembly (NASS). They descended to the lowest abyss of disgraceful conduct. It is now very clear that the 8th NASS is suffering from acute poverty of patriotism, a yawning lacunae for dignity and an irredeemable deficiency in righteousness.

“To boo and jeer during the presentation of an annual budget shows that our legislators are not interested in how Nigeria makes progress. This was an occasion when lawmakers are expected to show seriousness as the fate of the nation and its people for the next year was being reeled out. In saner climes, the elected representatives of the people manifest concern as the budget of their country is read. They eschew politicking and listen with rapt attention. But not Nigerian lawmakers of the 8th NASS. These are the same lawmakers who delayed 2018 budget for seven months and refused to have anything to do with it until they had sliced off the juicest portions unto themselves.

“MURIC is not depriving the lawmakers of their right to disagree with the executive. But no lawmaker worth the salt anywhere in the world will carry political disagreement to issues pertaining to the welfare of the citizens. The budget of a country reflects the fate of the people and their welfare at least for that year and sometimes impacts on their future. For choosing to make caricatures of themselves on that august occasion, our lawmakers have proved that they are not worth the trust reposed in them.

“MURIC is not tongue-lashing the lawmakers for booing. We are chastising them for booing without knowing when to stop. Donald Trump was booed during the State of the Union address on 17th January, 2018 but it was done in a very civilized manner. Democrats who booed him kept quiet after a while and listened attentively because they knew it was about America, not about Trump. They booed Trump for being inhuman by trying to halt chain immigration of poor people from the Third World. That was issue-based.

“Our own lawmakers booed the president non-stop to the extent that Speaker Dogara who was expected to dive the closing remarks could not do so. They booed without borders. They threw caution to the winds.They booed President Buhari for identifying with the poor masses of Nigeria, for refusing to steal and for exposing their voracious gluttony. It is laughable, detestable, repulsive and condescending, It is, indeed, a tale of two cities.

“Lawmaking is a leadership position but our lawmakers failed to display the necessary qualities of leadership. They disappointed Nigerians. All those who partook in the booing and jeering need to be taken back to school where they will learn the art of discipline and the qualities of leadership. They are square pegs in a round hole. It is such a shame that our lawmakers decided to vent their spleen in such a disgraceful manner on their president simply because the man refused to join in the rapacious avarice to loot the nation dry. They failed to realize that the line of demarcation between lawmaking and law-breaking is very thin and fragile and they crossed that line in their exhibition of legislative rascality.

“Whereas Prophet Muhammad (peace be upon him) said, “The leader of the people is their servant”, our lawmakers see themselves differently. They are feudal lords. They belong to the capitalist and bourgeois political class to whom the people’s welfare means very little. They lack a civilized political culture and their political ideology springs from a ‘bolekaja’ mentality where bitterness, acrimony, derision and violence take the driving seat. This much was displayed by them during the presentation of 2019 budget.

Soldiers Should Not Be Politicised – Buhari