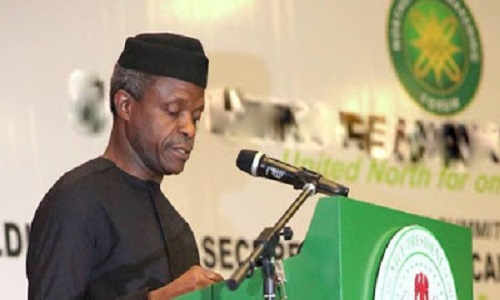 Nigeria’s Vice President, Prof. Yemi Osinbajo, has said that with the conduct of peaceful elections and transitions from one government to the other on the continent, it was clear that democracy had come of age in Africa.

Mr Laolu Akande, the Senior Special Assistant on Media and Publicity to the Vice President, issued the news release in Abuja on Tuesday. He said Osinbajo made the remark in Conakry, Guinea, at the inauguration of Prof. Alpha Conde’s second term in office.

“It shows that democracy has come of age in Africa. All over, you can see the demonstration of peaceful elections, peaceful transitions from one government to another,” the Vice President said.

According to the release, Osinbajo, who represented President Muhammadu Buhari at the ceremony attended by several African presidents and leaders, noted that peaceful elections were producing right leaders on the continent.

While lauding the leadership of the Guinean President and congratulating the people, Prof. Osinbajo described President Conde as “a great leader, a person who has committed himself to developing his people; a leadership that focuses on development of infrastructure and human capital”.

In his remarks, President Conde expressed willingness for greater bilateral cooperation with Nigeria while seeking more support and assistance for the new administration. (NAN)

We Pray Naira Doesn’t Fall Against The Dollar Again – PDP

#Brazil2014: Cuiaba under construction as Cup comes to town