The suspects are said to be notorious for snatching motorcycles along the Galadinmawa-Durumi axis. 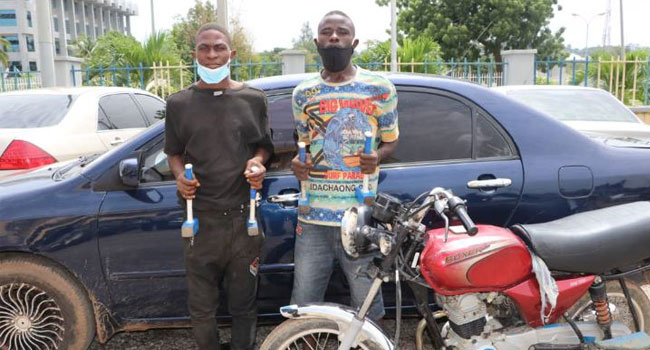 In a statement on Sunday, police spokesperson ASP Yusuf Mariam said the arrest of the suspected robbers was made possible following credible intelligence.

According to her, the suspects Bello Waziri (24) and Yusuf Ali (21) both male, were arrested by Police Operatives of the Galadinmawa Division.

The suspects who were caught in the act confessed to being members of a three-man syndicate responsible for snatching motorcycles from unsuspecting riders at night.

Both men further stated that they use a hammer to hit their victims leaving them unconscious before taking their motorcycles.

The police say efforts are in place to arrest the third suspect.

Exhibits recovered include; four (4) hammers, one (1) motorcycle, and one (1) blue colour Toyota Corolla.

Your Girlfriend Might Be Snatched At Obi Cabana’s Mother’s Burial – Kanayo O. Kanayo

On a sad note…Public Announcement