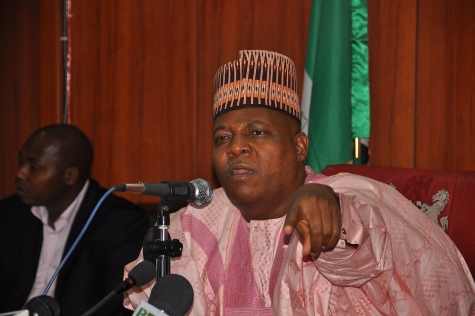 Governor Kashim Shettima of Borno State on Wednesday called the Director of Media and Publicity of the Peoples Democratic Party Presidential Campaign Organisation, Chief Femi Fani-Kayode, a dubious liar and a manipulator of facts.

The governor, who had recently engaged in war of words with the Jonathan campaign spokesman, said he decided to react to Fani-Kayode’s present tirade in order to put the fact right and ensure that Nigerians were not sold a lie that was mischievously conceived and concocted by a “mentally immature” mind.

Fani-Kayode had on Tuesday, in a statement, claimed that Shettima came second at the Borno State governorship primary of the defunct All Nigeria People’s Party in 2011, where Fannami Gubio, who was later killed by suspected Boko Haram members, emerged the candidate of the party.

However, Gov. Shettima, in a statement by his Special Adviser on Media, Mallam Isa Gusau, said his reaction would “perhaps be the last time a response would be given to Fani-Kayode so as not risk being placed in his category of being physically an adult and mentally an infant”.

The statement read, “The latest media attack by the controversial Chief Femi Fani Kayode issued on Tuesday, March 10, 2015 has once again exposed him as the dubious liar that he was, he is and will forever be when he claimed that Governor Kashim Shettima became the candidate of the ANPP in 2011 after the party’s flag bearer, Fannami Gubio, was killed because Shettima came second at the ANPP governorship primary election that was won by Gubio, meaning Shettima stood to benefit from Gubio’s killing.

“For the sake of putting the records in proper perspective and in order to expose Fani-Kayode’s deliberate falsehood, Governor Kashim Shettima did not participate in the primary election that produced Modu Fannami Gubio as candidate of the ANPP ahead of the 2011 governorship election in Borno State. This contradicts Fani-Kayode’s statement yesterday (on Tuesday) giving an impression that Shettima was second at a primary that was won by Gubio.

“Of course, the aim (of Fani-Kayode’s attack) is to mischievously link Shettima with Gubio’s killing and this is to support the ongoing propaganda of the billionaire ex-governor of Borno State, Ali Modu Sheriff, and the PDP aligned to him, to score cheap point ahead of the April 11, governorship election”.

The statement added, “Could it be that Fani-Kayode was handsomely paid to further that propaganda?

“The late Gubio contested the 2011 ANPP governorship primary with Alhaji Adamu Yuguda Dibal, who was the sitting deputy governor of Borno State, under Governor Ali Modu Sheriff. The election held in January, 2011, inside the Forsham Conference Centre in Maiduguri. Dibal and Gubio were the only two aspirants that contested that ANPP governorship primary, held at night and Gubio won with 515 votes while Dibal got 169 votes, with a total of 709 votes cast by delegates.

“Kashim Shettima was one of the four ANPP chiefs that openly declared he had no intention to contest the 2011 governorship election when he was called to speak at an ANPP stakeholders meeting held at the multipurpose hall of the Government House, Maiduguri around November in 2011, which was presided over by then Governor Ali Modu Sheriff and everyone in Borno knew this.

READ  You Are A Dictator — Governor Umahi Attacks Wike

“Shettima was not among the first three most likely persons to secure the ANPP governorship ticket either before Gubio’s death or after he was killed”.

The statement noted that even before Shettima later surprisingly emerged as the candidate of ANPP in Borno, there were people in the party that were better positioned than him as he was largely seen as a greenhorn politician, who was appointed a Commissioner in 2007 from his position as a General Manager in Zenith Bank.

It further stated that Shettima came into the picture much later after Gubio’s death and the need to have a new candidate, when Sheriff, as the governor, then opposed the candidature of Alhaji Mohammed Imam and the party stakeholders decided on February 7, 2011, to make Shettima the candidate.

The governor, therefore, advised Fani-Kayode to stop manipulating facts to get at people, wondering how someone could relate the death of a candidate on January 28, 2011, to the surprise emergence of a new candidate on February 7, 2011, if not to deceive Nigerians.

He said, “We please advise ignorant Fani-Kayode to do some research before making statements so that he doesn’t keep embarrassing our President and the PDP. Femi Fani-Kayode seems to be one that knows very little and thinks he knows so much”.

I Can’t Wait To Have A Boy – Alexx Ekubo

PRESS BRIEFING OF CHIEF OF STAFF TO THE COMMISSION