FREETOWN, Sierra Leone, April 3, 2014/African Press Organization (APO)/ — An International Monetary Fund (IMF) mission visited Freetown during March 17-April 1, 2014 for the first review of Sierra Leone’s program supported by the IMF through the Extended Credit Facility (ECF).The mission met with the Minister of Finance and Economic Development, Dr. Kaifala Marah; the Governor of the Bank of Sierra Leone, Mr. Sheku Sesay; other senior officials of the government and the central bank, representatives of the business community and civil society, and development partners.

“Program implementation remained good. At the end of December 2013, all quantitative performance criteria were met; and all quantitative indicative targets, but one, were observed. The indicative floor on poverty-related spending was lower than programmed mainly because of slower-than-expected execution of investment financed domestically. Structural reform measures planned for the end of December were also implemented on time.

“Good progress was made in program review discussions. The mission expects to discuss remaining policy issues with the authorities in the coming weeks, with a view to paving the way for the IMF’s Executive Board consideration of the review before end-June.

“The mission would like to thank the authorities for their continued excellent cooperation.” 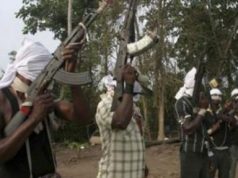 An extended family of elephants