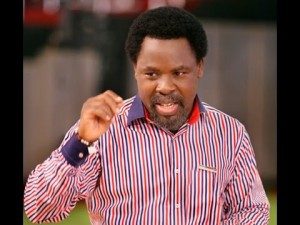 The general overseer of The Synagogue Church of All Nations, TB Joshua, has reportedly deleted a Facebook post in which he predicted that Hillary Clinton would be elected president of the United States.

According to a report by SaharaReporters, Joshua had posted his prophecy two days before the election saying he “saw” a woman winning the US presidential election.

It was further gathered that after Donald Trump’s victory on Tuesday, November 9, 2016, TB Joshua had removed his “prophesy” from his official Facebook page.

Shortly after Trump was announced the President-elect, Reno Omokri, an aide to former president Goodluck Jonathan has questioned the source of Prophet T.B Joshua prophecy on the US presidential election.

He wrote: “It is official. President-Elect Donald J. Trump. I am glad to have campaigned for you. Dear TB Joshua, who gave you your prophecy? My God that I serve is not a man that He will lie!”

And just like Omokri, several Nigerians have took turns in humouring the alleged prophecy of TB Joshua.

My Hospital Bills Are Too Expensive For Me – Chukwuemeka Ani