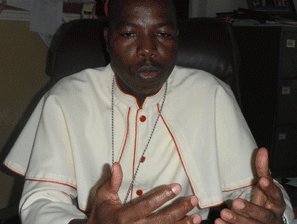 The Catholic Bishop of Yola Diocese, Dr. Stephen Mamza, has advised President-elect Muhammadu Buhari not to consider for political appointment, anyone less than three years in the All Progressives Congress (APC), noting that members of the Peoples Democratic Party (PDP) that recently decamped to APC would derail the government.

The clergy, who made the charge during a sermon at St. Augustine’s Catholic Church Bekaji, Yola, said those politicians leaving the PDP in droves for APC have shown to the world that they are only after what they can get not what they can give to the people.

“My special advice to the President-elect is that he should not give appointment to anyone that is less than three years in APC. This will help him to build a government that is based on the APC agenda, but if he makes the mistake of mixing his government with the PDP members who are in APC for appointments he would disappoint those that elected him.

“If these PDP members that are running to APC are principled people, and they love democracy, they will remain in PDP and rebrand the party for the next elections. But rushing to APC confirmed that they are only in politics for their selfish interest and not for the development of the country.

“I respect those PDP members that are still in PDP, they are the true democrat of this country”, he stated.

The bishop explained that the action of the PDP defectors confirmed that they betrayed their former party (PDP) during the recently concluded general election, which the party lost to the opposition APC.

See also  Something Must Be Done For Schools - Prof. Ijaiya

Dr. Mamza, who cautioned the president-elect strongly against giving appointments to any of the PDP members that recently defected to APC, said that PDP members that are joining the incoming governing party pose a serious threat to the government of Buhari and that they are not coming to the party to help develop Buhari’s administration, but to sink the party in the same way they sunk President Goodluck Jonathan’s government.