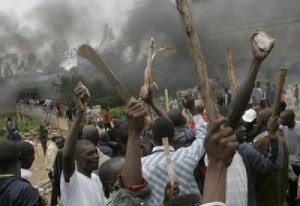 In a report by Punch Newspaper, the Governor’s aides are Special Adviser on Tertiary Education, Godswill Ziriki and the Chairman of the Local Government Service Commission, Adolphus Ofongo.

Convened by the Acting Chairman of the local government area, Kia Nigeria, the meeting had reportedly commenced one hour before the political thugs emerged to threaten the governor’s aides in the presence and disrupt the entire process.

The meeting, it was also reported, was convened to interact with over 14 state aspirants eyeing the seat of Constituency 3 at the state’s Assembly.

The thugs reportedly threw chairs into the air to disrupt the meeting and threatened to kill some individuals present at the meeting.

In furtherance, some of the stakeholders at the meeting reportedly claimed the thugs targeted the two governor’s aides.

The meeting, it was reported, held at the Latik Hotel on INEC Road, Yenagoa.

I Enjoy Playing With My Teammates At Man Utd – Pogba