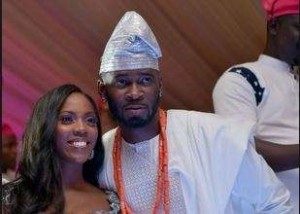 It won’t be totally wrong to conclude that estranged entertainment couple, Tiwa Savage and her hubby, Tunji Balogun are ‘officially’ back together.

Sources disclosed that both attended the event together with their son and aides before returning to Lagos.

It was further gathered that Teebillz remained at the backstage with their son, Jamil, all through Tiwa’s 10 minutes performance.

They were first spotted together at media personality Stephanie Coker’s wedding.

The celebrity couple were seen for the first time together on Friday, December 30, 2016 since their marital drama back in April 2016.

Tiwa and Teebillz appeared very fine together as they reportedly rode in the same vehicle out of the venue of the event.

Nigerians With Real Wealth Do Not Flaunt It – Shade Ladipo

I Told Neymar To Learn From Loss – Dani Alves

Persistence And True Spirit Of Sportsmanship Have Kept Me On –...