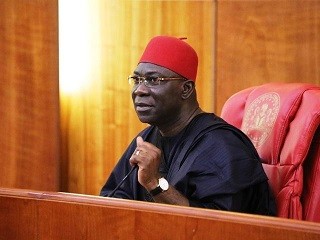 Deputy Senate President, Ike Ekweremadu, who is currently under investigation by the Nigerian Police over his alleged role in the amendments made to the 2015 Senate Rules, on Thursday decried the renewed Boko Haram attacks in the country.

Ekweremadu, who was speaking with journalists in Abuja on Thursday, expressed dismay that the unfortunate development had attained a frightening dimension since President Muhammadu Buhari took over power on May 29, 2015.

He said, “I am worried about the insurgence of the Boko Haram activities in Nigeria. Shortly before the inauguration of the present government, the country had almost rolled back Boko Haram and its activities in every part of Nigeria – from Adamawa to Borno to Yobe.

“I had hoped that by now we would be tasking ourselves on how best to rebuild that part of Nigeria. Regrettably the actions of Boko Haram seems to have resurfaced now not only in Borno, they have carried out their activities also in Plateau, they have gone to Adamawa, Kaduna.

“I am worried that if nothing is done, the next target would be Abuja. Maybe they start going to South. It is important for us as those in government, whether Executive or Legislature, to come together to find solutions to these problems”.

The deputy senate president, therefore, appealed to neighbouring countries and the international community  to support the country to  roll back the activities of Boko Haram, stressing that there was no way the nation could  achieve progress in the country when there were security problems.

Specifially, Mr. Ekweremadu charged the Buhari administration to as a matter of urgency, “deal with this security challenge no matter what it would cost us”.

He also called for a synergy between the Executive and the Legislature in order to deal with the menace of Boko Haram.

Ekweremadu said, “We must be on the same page on this matter. I believe that it is time for us to have meetings with the Executive as well as the security agencies in order to find out exactly what has happened – why the resurgence of these Boko Haram activities and what we can do as a people to ensure that this matter is dealt with decisively”.

The deputy senate president also expressed sympathy with the Boko Haram victims and called for an immediate action to put an end to the insurgency.

He said, “We believe our President would sit on top of this situation because we believe that Nigerians are worried about this situation and they would like to see an end to Boko Haram activities.

“We would like to do everything to encourage our President, to support him and bring this situation to an end so that we would be able to have peace within this area – the North-East of Nigeria and indeed all parts of Nigeria.

“Whatever has caused this insurgence, we need to address it and aggressively too before it gets too late. I am very worried about the situation. I do hope that we would be able to work together to find solution to this and come to the end of this Boko Haram activities.

“The education sector has suffered there, even the economy of the place has suffered so much, and our brothers and sisters from other part of the country that lived there have since left the place. It is a big challenge we must all come together to deal with”.

The deputy senate president, however, expressed the hope that the nation would overcome the challenge.

“I will like to assure our friends and the international community that the challenge, though enormous, is not beyond our control”, he said.

Aurionpro's Board of Directors Names Samir Shah as CEO