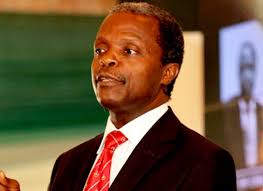 Acting President Yemi Osinbajo on Thursday advised Gov. Willie Obiano of Anambra and members of his family take solace in God as their matriarch was laid to mother earth.

Osinbajo, who was represented by the Minister of Interior, retired Gen. Abdulrahaman Dambazzau, gave the advice during the funeral ceremony of the late Mrs Christiana Obiano in Aguleri.

Osinbanjo described madam Obiano as a woman of virtue, who devoted her life to serve God and humanity, adding that the news of her death was shocking.

He urged the governor and members of his family to take solace in the fact that she led a good life and enjoined them to uphold her legacies.

In his sermon, the Most Rev Dr Hillary Okeke of the Catholic Diocese of Nnewi, said anyone who believes in Jesus Christ does not die but lives in eternity.

Okeke, who drew his homily from the John 11: 17-27, said people should not mourn as those without hope because Christ represents resurrection and those baptised in Him would rise on the last day.

He extolled madam Obiano for living a Christian life and bringing up her children in the fear of God.

The bishop underscored the need for a change in mindset and attitude for a better society.

Also speaking, the Most Rev. Nicholas Okoh, the Primate, Church of Nigeria (Anglican Communion), described Obiano as a good man.

Okoh urged greater cooperation among Nigerians for a better tomorrow, while thanking those who identified with the governor at his time of grief.

READ  Why PDP Will Never Be Credible In Elections In Nigeria

In his remark, the Bishop of Onitsha Archdiocese, Most Rev. Valerian Okeke, prayed for the repose of the soul of madam Obiano.

Okeke asked that the podium where the funeral mass was held be used as a memorial for the deceased.

NAN also reports that a large number of bishops and priests from the Catholic Church and other denominations attended the funeral mass.