Zlatan Ibrahimovic Is A Winner – Herrera 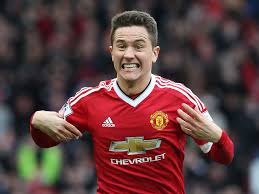 Ander Herrera hailed the performances of Manchester United teammates Zlatan Ibrahimovic and David De Gea after they beat Southampton 3-2 to lift the EFL Cup trophy at Wembley stadium on Sunday.

Swedish forward Ibrahimovic, who joined United as a free agent last summer following the expiration of his contract with Paris Saint-Germain, put his team ahead in the 19th minute with a brilliant free kick before Jesse Lingard made it 2-0.

After Southampton pulled level through Manolo Gabbiadini’s brace, Ibrahimovic headed in Herrera’s cross for the winner three minutes from time.

Herrera said of Ibrahimovic to Cadena Ser radio: “He appears at crucial times and we needed him in the 86th minute. He scored the goal that gave us the title.

“I’m asked many times about him, and I don’t know what to say anymore. He is 35, he has won things in all the countries he has played in.

“He is competitive, he drills us about winning each game in every training session. He is a winner.”

Herrera said without Ibrahimovic’s famous character he would not be the same player, adding: “You have to put up with how competitive he is.”

The Spain midfielder — who has made 32 starts in all competitions for United this season, his latest on Sunday — also praised compatriot De Gea.

“David has made two or three crucial saves,” he said. “He is no longer a surprise. For three consecutive seasons, he has been voted the best player of the team, which is not easy for a goalkeeper.

“He has been included for three straight campaigns in the ideal XI of the Premier League and I hope we can have him with us for a long time despite the rumours circulating because he gives us points.”

There has been speculation once again that De Gea may return to Spain’s La Liga with Real Madrid reportedly interested in signing him this summer.

Real came close to acquiring the 26-year-old in the summer of 2015 but the deal fell through after the paperwork was not submitted in time.

“He has a good contract here and he is valued a lot by the fans,” he said. “He is a calm person. He is not anxious or in a hurry to make a change.

“We are winning titles [FA Community Shield, EFL Cup] and that helps. Besides, having come from Atletico, I don’t think that [playing for city rivals Real] would be easy.

“I don’t even consider the possibility that he could leave. I want him to stay for many years and not just because he is my friend, but because there are not many goalkeepers that earn you points like he does.”

Herrera believes De Gea, who is tied to United until June 2019, has a great future ahead of him.

“If he continues here, he will become a club legend as [Peter] Schmeichel and [Edwin] van der Sar,” he said. “I believe he can surpass them. I think he has that in his mind.”

Be A BBNaija Fanatic With Wisdom This Year – Dotun