2015 Campaigns: IBB Advises Politicians To Be Careful And Responsible In Conduct 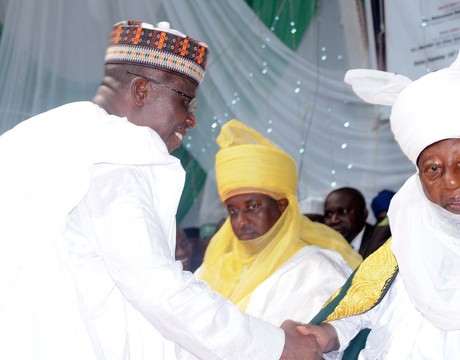 Gov. IDRIS WADA OF KOGI (L) IN A HANDSHAKE WITH THE EMIR OF ZAZZAU, Alhaji SHEHU IDRIS, AT THE PUBLIC PRESENTATION OF A BOOK TITLED “FASTING ACCORDING TO ISLAMIC LAW” IN Kaduna ON SUNDAY (18/5/14). WITH THEM IS Gov. MUKHTAR YERO OF Kaduna State.

As Nigerians prepare to go to the polls in 2015 to elect leaders in the forthcoming general elections, former military head of state, General Ibrahim Badamasi Babangida yesterday warned politicians to desist from engaging in acts capable of setting the country on the path of anarchy.

The former military president, who gave the warning in Kaduna while speaking at the presentation ceremony of two books written by the Director-General of the National Teachers Institute (NTI), Kaduna, Dr Aminu Ladan Sharehu, said politicians must not heat up the polity in their bid to gain acceptance.

He added that “politics is a game that produces a winner and not all contestants will emerge victorious at the polls; therefore, losers must learn to accept defeat with grace and prepare for another race someday”.

See also  Adegbite, Son Of Ooni Of Ife Is Engages To Dolapo Oni

Represented by Brigadier General Dantsoho Mohammed (rtd), IBB as he is fondly called, said that as the campaign for 2015 gathers steam, an overheated polity will produce nothing other than chaos in the land.

His words, “I wish to advise politicians to be careful and responsible as they start their campaign train; Nigerians deserve nothing less than the dividends of democracy that will grant minimum comfort for better quality life.

“This is what is required to take the youths off the streets, restore the confidence of the disenchanted and provide succour for the poverty-stricken masses of this country. This is what is needed to check the menace perpetrated by militants and Boko Haram insurgency”.

Speaking at the event, Gov. Mukhtar Ramalan Yero of Kaduna State said no amount of fighting or violence can elevate one to political office, but only God, and pleaded for peaceful coexistence among the people of the state and the nation in general.

Speaking earlier, the Sultan of Sokoto, Alhaji Sa’ad Abubakar tasked people with Islamic religious knowledge to imbibe the culture of educating the common folks with the basic tenets of Islam wherever they find themselves.

The Sultan, who was represented by the Emir of Zazzau, Alhaji Shehu Idris, noted that Nigeria is a country with diverse cultures and religious backgrounds where the natives speak different languages, and called on Muslims to propagate Islam.

In his welcome address, the author of the books – “Fasting According to Islamic Law” and its Hausa version, “Matsayin Azumi A Shari’ar Musulunci” – Dr. Sharehu, said lack of knowledge of Arabic is no more an excuse not to learn the basic facts and principles of Islam.

According to the NTI boss, fasting is one of the five pillars of Islam but it must be done as stipulated in the Qur’an, which is why the book was written to enlighten the Muslim faithful on the right way of fasting.

Cisco at INTX 2015: Jet Power for the Era of Propellers

Every Save Is Important – De Gea

I’m Grateful To God For My Grammy Certificate – Niniola