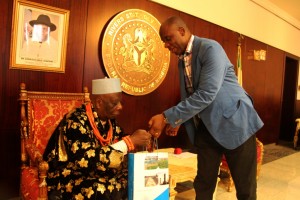 The Ogoni people of Rivers State have restated their demand to produce the next gov­ernor of the state come 2015.

While commending the leadership qualities and development strides of Governor Chibuike Amae­chi in Ogoniland, they said their demand was justifiable.

Their position was contained in a communiqué issued at the end of a one-day Mini Congress of Ogoni Ethnic Nationality, organised at the weekend by the Supreme Council of Ogo­ni Traditional Rulers at Saa­kpenwa, headquarters of Tai Local Government Area of the state.

In the same communi­qué, the Ogonis decried the delay in the implementation of the United Nations Envi­ronment Programme (UNEP) Report on Ogoniland by the Federal Government, almost three years after it was made public.

The communiqué, which was signed by the President of the Supreme Council of Ogoni Traditional Rulers, King Godwin Gininwa; a delegate to the ongoing Na­tional Conference, Justice Peter Akere; the Gberemene Gokana Kingdom, King Barnabas Bagia; Gbenemene Babbe Kingdom, King Frank Noryaa; the paramount ruler of Ogale Clan in Eleme, Chief Godwin Bebe-Okpabi, representatives of MOSOP, KAGOTE and women, de­manded the immediate implementation of the report.

The communiqué read in part: “The Ogoni people as a distinct and one of the largest ethnic nationalities in Rivers State,  are very peaceful and have contributed tremendous­ly to the growth and devel­opment of Rivers State and Nigeria, through its (Ogoni’s) natural resources and human capital;

“Despite our huge contri­butions to the peace and sus­tenance of Rivers State and Nigeria, we have been delib­erately oppressed, neglected and marginalised socially, politically, economically and otherwise.

“We are deeply troubled by the delay in the implemen­tation of UNEP Report by the Federal Government of Nige­ria, almost three years after it was released, and therefore, passionately demand imme­diate implementation of the report.

“Our agitation to produce the governor in 2015 is justi­fiable; we, therefore, seek the understanding, cooperation and support of other ethnic nationalities in Rivers State, in the spirit of justice and re­ciprocation of Ogoni previous support for others”.

I Was The First Nigerian To Mill Rice Free Of Stones...