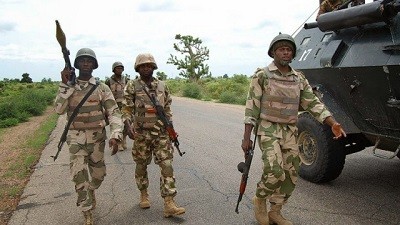 The Nigerian military says it has successfully detonated land mines planted by Boko Haram insurgents along the Maiduguri-Biu Road.

Acting Director, Army Public Relations, Col. Sani Usman, who stated this in a statement on Sunday, declared the road safe for usage as adequate security had been provide to ensure safety of commuters.

Usman specifically said the land mines were removed by the Special Forces Explosive Ordinance Devices Unit in collaboration with the police and the vigilance groups.
He said the team of security operatives successfully detonated four Improvised Explosive Devices planted by the insurgents during the operation.

The insurgents had reportedly taken over a portion of the Maiduguri-Biu Road on Monday.

He said, “Please be informed that Maiduguri-Biu Road had been cleared of land mines by a team of Nigerian Army Special Forces, Explosives Ordinance Devices with support from Nigeria Police and local vigilance group.

“During the painstaking and thorough operation, four Improvised Explosive Devices planted by the suspected Boko Haram terrorists were discovered and successfully detonated.
“Commuters are encouraged to use the road as adequate security has been provided.

“The Nigerian Army wishes to further enjoin the public to be more security conscious and report any suspicious persons and movement to the security agents”.

APC Does Not Take The Youth Into Account – Atiku

Injury woes for likuena as they face harambee stars

FG Will Not Rest Until Chibok Girls Are Rescued – Omeri